carolheard, Author at The Post-Searchlight 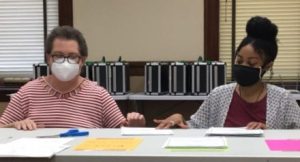 Elections Board votes to make audits part of post-election process

The Decatur County Board of Elections voted last Tuesday to begin making audits part of its post-election process. The March 16th Special Election with its ... Read more

The Town of Brinson has called for a special election to fill the vacancy of the seat formerly held by Council Member Thomas Powell, who ... Read more

By the time the Nov. 3 General Election arrives, more than half of Decatur County’s active voters would have cast their ballots. Read more

T.J. Carlisle, the son of Russell and Teresa Carlisle from Attapulgus, Ga., is awarded a $1,000 college scholarship from Auto Value auto parts and service ... Read more

Two filmmakers from Brussels, Belgium, plus their cameraman and sound man, are hoping to show middle America to European audiences by finding all the places ... Read more

5 Star to expand to Bainbridge

Five Star Credit Union plans to build a regional branch here after it purchased the old Buyer’s Choice property, which is located at 1027 Shotwell ... Read more

There were the industries—Propex and American Fibers. Then some of the smaller businesses, and of course the local governments who have had their share of ... Read more

The Bainbridge-Decatur County YMCA will celebrate its 25th anniversary in September, but according to some of the leaders of the organization, the YMCA will be ... Read more