Elections Board votes to make audits part of post-election process 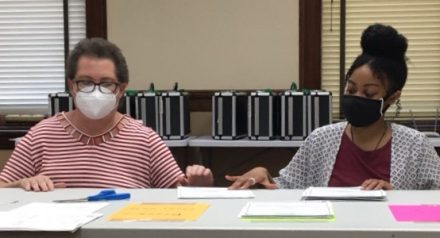 The Decatur County Board of Elections voted last Tuesday to begin making audits part of its post-election process.

The March 16th Special Election with its one question presented an opportunity for the Elections Board to begin conducting audits as a routine prior to certifying its elections. The audit conducted on Thursday, March 18, was a hand audit.

The Board’s feeling is that it would be good practice for the Elections Board to proceed with some type of audit following each election and get in the practice of conducting an audit. The most significant result from the audits will be to further institute trust in our election results, and the paper ballots allow for those audits, Elections Board Chairman Keith Sellars said.

The hour and half audit was completed by two poll workers to ensure that every vote cast on the ballots exactly matched with the results from the tabulators.

“This audit ensured every ballot was counted and accounted for,” said Chief Elections Official Carol P. Heard.
Heard said there was an anomaly with one blank ballot within each of the 475 Election Day ballots, the 231 Advanced Voting ballots and the 13 mail-in ballots. The audit accounted for this oddity, Heard said.

Sellars said by conducting audits prior to certification is above and beyond what is currently required, but the audits ensure the numbers are accurate.

“It was well worth what little bit of costs that was involved in doing it,” Sellars said. “I like them because it is always good to verify the numbers you are seeing.”

The hand audit was similar to the hand audit held following the Nov. 3, 2020 General Election, except of course on a much smaller scale. Another type of audit, a risk-limiting audit – will be required in all statewide and federal elections no later than Nov. 1, 2024.

Georgia state law says a risk-limiting audit is an audit protocol that makes use of statistical methods and is designed to limit to acceptable levels that risk of certifying a preliminary election outcome that constitutes an incorrect outcome.

The audits, as well as all logic and accuracy testing and tabulations, are all open to the public.