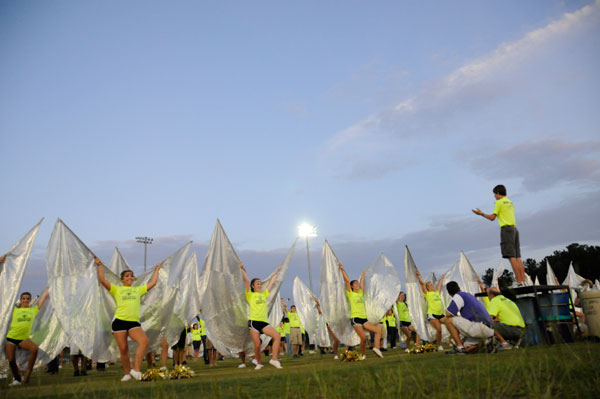 NOW ON STAGE before parents, family members and supporters, the Bainbridge High School Bearcat Marching Band concluded band camp on Thursday with an introduction to its 2011 halftime show. Drum major Tanner Jackson directs the band as instructors and assistants observe.

With commands of “Don’t move,” “No talking” and “You’re now on stage,” the more than 230 Bainbridge High School Marching Bearcat Band members walked on the BHS practice field Thursday night, and put on a show.

The show includes hits from the country super group Rascal Flatts. The BHS band opened its performance with one of Rascal Flatts No. 1 hits titled “Pieces.” Their next song, which features the Color Guard and Dance Line, was “Summer Nights.” The band chose a recent hit by the group titled “ I Won’t Let Go,” and completed its performance with another No. 1 selection called “Life is a Highway.”

Paschal Ward, director of bands, said in a prepared release, “Football season is just around the corner and nothing goes better with football than a fine marching band. Our students have gotten off to a great start and they all look forward to their first game and performances this year.”

At the end of the performance, Ward asked the packed field of parents, family members and other supporters to find their band member and stand by them. The field was then quickly filled with band members in bright yellow T-shirts and their family and friends standing beside them.

Ward then thanked the parents, family members and band supporters, as well as school and Board of Education officials in their support of the band program.

“I certainly appreciate the continued support of our Board of Education, our fine superintendent and all of the administrators within our school system,” Ward said.

This year’s camps began back in June with the percussion section coming in for a week-long camp of instruction. This camp was followed by the Dance Line, Color Guard and Rookie camp the week of July 11.

Routines were begun for the Dance Line and Color Guard while the new instrumentalists began working on basic marching procedures. These camps were followed with the full band camp, which began on July 18 for two weeks of hard work and dedication from all of the band members.

Band directors in addition to Ward are BHS assistant director James Sewell and the newest addition, Jessica Eastridge, who is now the director at Hutto Middle School. Eastridge is from the University of South Carolina.