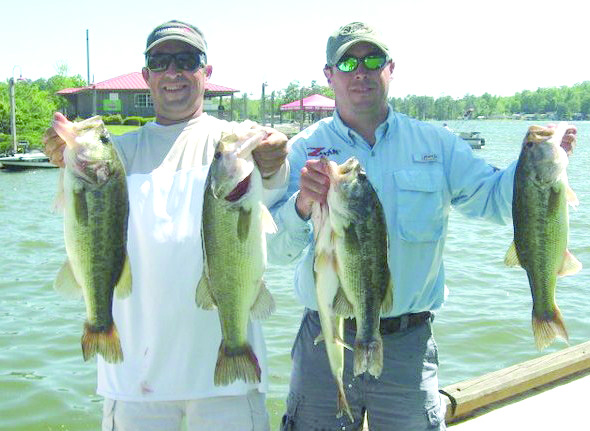 Paul Tyre and Chris Bell, winners of the Fishers Of Men Tournament on Lake Harding on Saturday.

The Palm Sunday Massacre took place over the Mederainian Sea in 1943 when Allied War planes intercepted slow moving German transport planes carrying troops and supplies to General Rommel in North Africa. They shot down all they could before having to return to base. He later stood on a hillside and watched a fuel tanker bringing fuel for his tanks being torpedoed by an allied submarine.

Buddy Bethea, Dylan Bethea and Kevin Bethea of Bose Springs, Fla., using homade jugs that they tie themselves on Spring Break, ate all the Bream, Shellcrackers and Crappie they could eat every nite and carried home 250 mixed and fileted.

30 Bass taken, 1 at 7 lbs. on Plastic from the info we’re getting Big Sow Bass has gone on the beds in many places. Strange things happen.

The Valdosta Bassmasters weighed in at Wingate’s Lodge with Earl Roberson having 11.14 lbs., Ed Deane having 10.4 lbs and a 3.1 lbs. Big Fish, Jerry McKinney had 8.1 lbs.

The Valdosta Kids Club had David Parker taking 1st Place with 4.15 lbs. and Dekota Rayell taking 2nd Place with 3.4 lbs. There was about 8 of the kids but the rain and wind was just too hi for them. They took some short fish but culled them all.

Our own Paul Tyre, along with his fishing partner, Chris Bell, went up to Lake Harding and showed them how to fish! They took 1st Place and set a Fishers Of Men record for that lake. Way to go guys!

Coming up this weekend here at Wingate’s will be the Fishermen For the Hungry Tournament on Saterday. Ya’ll come on out and fish, that’s for a great cause.

On Sunday we’ll be having sunrise service on the shore at Wingate’s at 7am. Follow that with a breakfast at the cafe and you’ll be set!