The signs and scents of spring

The following trees and shrubs show us the signs of spring in the air; Sweet Gums, Hog Haws, Sassifras, Elderberry, Cypress Trees, Hickory Trees and the enfernal nose chocker, eye waterer Pine Pollen has done took over our part of the South.

It’s a sad thing that two of our most beautiful southern flowers, Azalias and Camelias, don’t have any smell but the Wild Honeysuckel (on the fences) and Wild Crabapple is the fragrance giver we have in the southern woods.

While going to the doctor last week I spoke of seeing a wood stork and a pole cat in the Oklocknee River area. Due to the coyotes, the pole cat is hard to find in our area. Mrs. Nell Ingram of Seminole County has trapped seven pole cats from under her house and killed them. She says it’s barely livable in her house now.

Limit catches of crappie has come across the docks this week. Most going about 1 1/2 pounds each, some on jigs and some on minnows. Big shellcrackers are seen gathering to bed, talapia are bedding in the clear water most everywhere. In other lakes south of us, they take over the food chain for the bream, shellcrackers, crappie and bass. Here we will have a big cold snap several years apart.  That will kill them back so they “Don’t Rule The Roost.”

The Bainbridge Bass Club fished out of Wingate’s on Saturday with first place going to Richard Predmore with 16.71 pounds, second place went to Webster with 13.28 pounds, third place went to Mike Webster with 7.46 pounds and Big Fish at 5.03 pounds. None of the above fish were killed.

The Hydrilla Gnats Bass Club fished out of Wingate’s on Sunday with first place going to Andy Koundourakis with 17.69 pounds, second place going to Paul Tyre with 17.35 pounds and third place going to Sean Neel with 16.53 pounds.  Nic Jeter had Big Fish at 6.02 pounds.

And by the way, I think the Hydrilla Gnats Bass Club should endorse the “Georgia Gnat Co.” of Nashville, Ga., for their invention of the Gnat Face Mask. 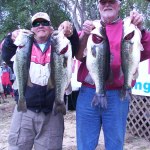 EDDIE DITTO AND STEVE BUSHORE of Recovery, Ga., with their second-place catch from the Wingate Open on Saturday. 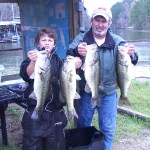 THE WINNER OF THE Hydrilla Gnats Club Tournament, Andy Koundourakis, along with Jake Jeter, who helped him hold his winning catch of 17.69 pounds. 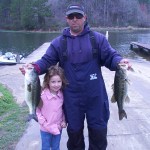 PAUL TYRE, with daughter Jaydyn, who took second place in the Hydrilla Gnats tournament with 17.35 pounds. 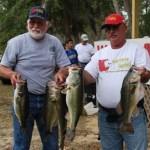 Taking 1st place in the 2011 Wingate Open were Steve Stewart and Johnny Creel with 26.23 pounds. 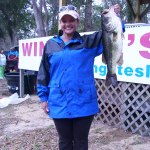 VIVA HOWETT with a contender for the Big Fish weighing in at 7.73 pounds.

The following arrests and citations, a list of those occurring between March 2-March 8, have been reported by the Decatur... read more