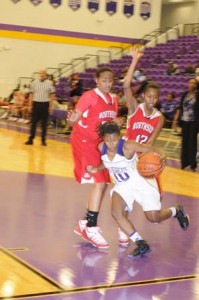 Bainbridge led 26-20 at the halftime, but in the fourth quarter the Lady Patriots battled back.

Thomas hit a layup to give the Lady Cats a 49-48 advantage in the fourth.

But Tiera White of the Lady Patriots hit two free throws, making it 49-50 to flip the advantage to Northside.

Lady Cats Bria Harris flipped it back to Bainbridge’s advantage with a layup, giving the Lady Cats a slim 51-50 margin.

Thomas added two of her insurance points with a layup to make it 53-50.

But the Lady Patriots still had hope—Hope Thomas—who scored two points to bring the score to 53-52, still the Lady Cats’ favor, but still winnable for Northside.

But as the clock was ticking down with less than 12 seconds showing, Briana Wade sank one of two free throws to show the final score. The Lady Patriots then made a desperation shot, which missed.

Lady Cats’ Thomas led with 22 points, followed by Harris with 12 and Jasmin Kelly with 10.

The Bearcats will begin their Region play Wednesday night beginning at 8:30.