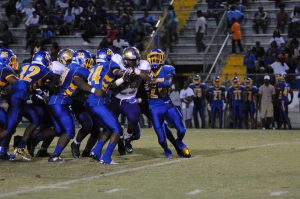 Bainbridge running back Dameon Pierce rushed for 330 yards on 50 carries Friday night against Rickards (4-1), but even his performance wasn’t enough to carry the Bearcats to a win as they fell 36-34 to the Raiders.

Rickards was leading 36-28 with 1:18 left in the game when quarterback Derearl Phillips threw an interception to Kerenski Williams, who ran it to the 8-yard line.

“I just saw the quarterback drop back and he was looking at the wide receiver,” Williams said. “I had to play smart. I was one of the captains on the team to lead us into the victory. I tried. I never gave up. God put faith in me.”

Pierce took four runs to bust into the end zone and make the score 36-34.

Brett McLaughlin’s 2-point conversion pass was too high, and the Raiders ran out the clock with 11 seconds left on the board.

Pierce’s rushing night breaks the record for most rushing yards in a game, formerly held by Phillip Bryant with 270 rushing yards against Dougherty in 1983.

“Through the week, coach really stressed that we would have to run the ball really well because we were having trouble at the receiving game,” Pierce said. “I feel that the O-line played very well. We played all our assignments as a team. We had a great effort. I owe it all to my O-line and everybody that was blocking. Overall a great effort by the whole team, and I’m really proud of these guys.”

McLaughlin was 4-for-9 for 34 passing yards.

Coach Jeff Littleton said the game plan of rushing the ball worked well, but in the end it wasn’t enough.

“We came out slow and missed some assignments early,” Littleton said. “We kept fighting because we knew what we wanted to do as far as game plan. Everybody believed in what we were doing. That’s the thing we were missing, a little trust had been missing there. Nobody ever gave up. We stuck with the game plan and we kept pounding them and kept making stops on defense. But it just wasn’t enough in the end.”

Bainbridge’s loss puts them at 1-4 on the season.

The Bearcats return to action next Friday against Veterans for homecoming. Kickoff is 7:30 p.m.