Meal discounts a ‘sign of the times,’ BOE told 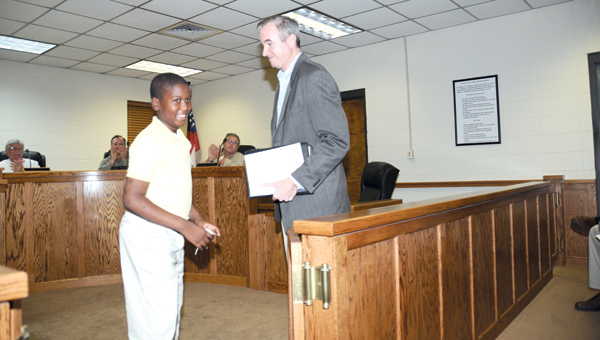 Almost three-fourths of the 5,604 full-time students in Decatur County are on free or reduced-price lunches, the Board of Education was told at a special called meeting Monday.

Decatur County School Nutrition Director Debbie Crosten-Purcell told board members that the number of students on the federally subsidized meal plans jumped to 72.48 percent, which she said is a sign of the economy.

“When I first came here several years ago, it hovered around 67 percent, and would bounce up to 68 percent. Last year, it went up to 70 percent,” Purcell said. “The fact that we have more students on free or reduced benefits is a reflection of the economy. It doesn’t necessary reflect a good thing, but it does show people are struggling.”

The school lunch program is not funded with local tax dollars, and in fact the county receives more money from the federal reimbursement program than it costs the county to prepare.

The federal government reimburses the school system $2.74 for the free meals, $2.34 for reduced meals and 28 cents for full-paid student meals.

Currently, it costs the school system $2.40 to prepare a meal, which includes the food, labor and overhead, Purcell said.

The board members also discussed in detail during their 6 p.m. “dinner meeting” to consider further action on the disposal of a presently unused parking lot at the corner of Miluli Street and Wheat Avenue.

Maintenance Supervisor Jerry Mills said the property is 1.69 acres. A letter by George Sasser, who noted he had not yet done a survey of the property, put the size of the lot at 1.92 acres.

Sasser said his letter was not a formal appraisal and only an opinion of value. He put the value of the property at $211,000.

Member Bobby Barber said he had been approached by several parents to consider that property as a practice field for the Bainbridge Middle School girls softball team. The school already has a baseball field, but it has 90 feet between each base and a grass infield. In softball, teams play on dirt infields and the distance between the bases is 60 feet.

Board Chairman Sydney Cochran said he would rather table the consideration of how best to dispose of the property until next month’s meeting so the public can offer input. During the regular meeting held across the hall from where the dinner meeting was, the board didn’t discuss specifics of the property but accepted a motion to table the issue until the next meeting so the public can offer input.

• Steve Bench summarized the energy conversation program, saying the county avoided spending $1.672 million in energy costs by managing its consumption of electricity, natural gas and water since the program started in 2005. He also stated that the new Bainbridge High School has decreased its energy cost by $21,881 from last year.

• The board approved the federal programs’ budget, which includes Title I programs. The grants were $2,699,610 for disadvantaged children, $318,229 for migrant children and $25,647 for Title III, Part A, which is for limited English proficient children. Other grants were approved as well, which included improving teacher quality; science, technology, engineering and math programs at BHS and BMS, and others.

• District Attorney Joe Mulholland presented Terrell Dailey of John Johnson Elementary School with a $500 U.S. savings bond for being picked as one of 120 students in Decatur County who had perfect attendance last year.