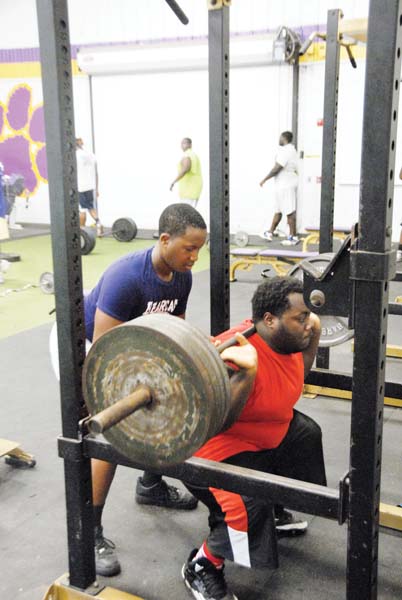 With the start of practice less than a month away, new Bainbridge football coach Jeff Littleton’s Bearcats are working hard with their off-season strength and conditioning program.

Littleton said there has been an average of 90 players each day, and as many as 100 players who have participated in the morning weightlifting and conditioning workouts. The Bearcats hold their morning workouts each Monday through Thursday, from about 9 a.m. until 11:30 a.m.

Littleton said the players are split into the linemen and the skill positions, and one group works on weightlifting while the other group goes outside and works on speed and agility drills. The groups then switch after about 45 minutes.

After both groups have completed each facet of the conditioning, the rest of the time is spent working on learning offensive and defensive formations. The players also participate in “7-on-7” drills, which are game-like situations where all players are on the field except for the four offensive linemen and four defensive linemen.

“The attendance has been really good so far,” said Littleton, who is starting his first year as Bainbridge’s coach after spending the previous eight seasons as an assistant coach at Cairo. “The only way these kids can learn is by being at the workouts and working hard, and they’ve been doing that so far. We’ve got some kids who are really working hard to be as competitive as they can be.”

Littleton said that the team recently participated in a 7-on-7 competition against Colquitt County and West Gadsden, and will take part in another competition later this week. They will attend a 7-on-7 event in Cairo on Thursday, July 18, where there will be three other teams from Georgia and four teams from Florida.

Littleton also said that the Bearcats aren’t scheduled to attend any camps at other high schools or colleges.

“We’re having the ‘Bainbridge Bearcats’ camp at our place every day, so to speak,” he said. “We’re doing our own drill work, and we’re working on our fundamentals and on our philosophies. We’re not going to worry about going to somebody else’s camp. We’re busy learning our stuff right now.”

“Right now, we’re just trying to focus on our strength and conditioning,” he said. “We’re working on familiarity with the offensive and defensive schemes, and getting better at the fundamentals.”

The Bearcats are scheduled to host Chamblee in a pre-season game on Friday, Aug. 16. They will then open regular-season play against visiting East Gadsden on Friday, Aug. 23.