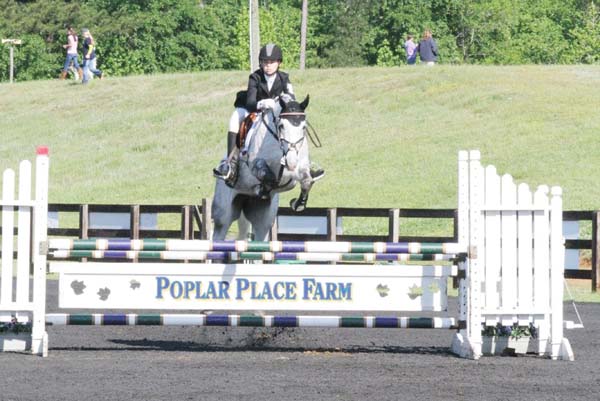 Dileo competed in the Area 3 Eventing Championships at Poplar Place Farm in Hamilton, Ga., on May 4-5. Seven different states are included in Area 3. In order to qualify for the area championships, competitors had to place first through fifth at a recognized U.S. Eventing Associaiton (USEA) horse trial, with no cross-country jump penalties. Dileo qualified with her horse, Rebel’s Legacy, in the Junior Training level division.

The championships were held in less than ideal conditions, due to the continual rain that started that Friday night, and continued into Saturday. Conditions on the cross-country course were muddy, slippery and challenging. The cross-country course had 23 jumping obstacles over a mile and 771 yards, with an optimum time of 5 minutes, 2 seconds. After a solid dressage test, Dileo and Rebel were ranked in first place heading into cross-country.

Based on the conditions, Dileo decided to run the cross-country course safely for rider and horse, resulting in time penalties and dropping them into fourth place.

The final phase was stadium jumping. Each of these jumps are a height of 3 feet, 3 inches. After a clear stadium jumping round, Dileo and Rebel successfully clinched fourth place.

Her fourth-place finish qualified her to participate in the Nutrena USEA American Eventing Championships, which will be held at Texas Rose Horse Park, in Tyler, Texas, in September.

This could be considered quite an impressive feat, since Dileo just started competing in eventing in July 2012. In just 10 months, she has moved from Beginner Novice, to Novice, and now Training level. Her next goal is to move up to Preliminary level and compete at the Red Hills Horse Trials, in Tallahassee, Fla., in March 2014.