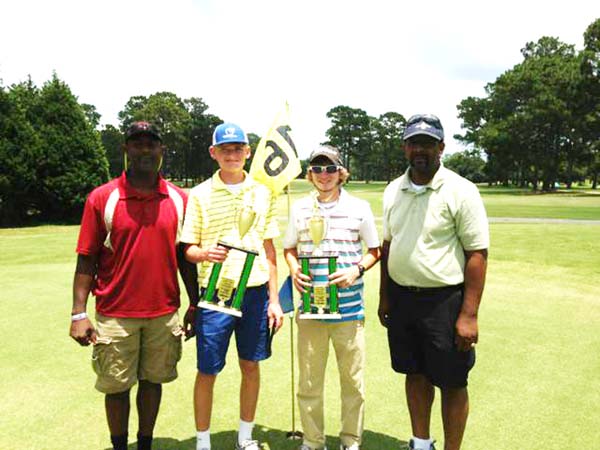 Fourteen two-man teams competed in the event, which was played as a two-man scramble format.

“We appreciate everyone who came out this year, and also thank our sponsors,” said tournament organizer Gary Riles. 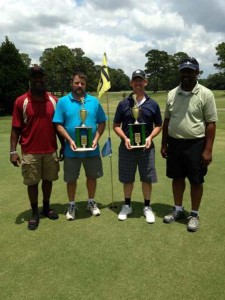 2ND PLACE: The Albany team of Eddie Mitcheson and Tim Leedon shot a 70 to place second in the 2013 Deltrice Riles Memorial Golf Tournament. Mitcheson and Leedon are shown with tournament organizers Gary Riles and his son, Ryan Riles.

Finishing second was the team of Eddie Mitcheson and Tim Leedon, of Albany, Ga., who shot a 70, or two strokes under-par.

Green was also awarded for having the longest drive of the day. Lester Bishop won the “Closest Shot to Pin” award.

No one hit a hole-in-one, although several golfers came close, Riles said.

The tournament was established by Gary Riles in memory of his son Deltrice, who passed away in a trucking accident on March 3, 2005. Deltrice Riles played baseball and football during his time at Bainbridge High School.

Proceeds from the tournament benefit the Deltrice Riles Memorial Scholarship, given each year by his family to a graduating BHS senior who demonstrates strong character, outstanding leadership and concern for others.

Special to The Post-Searchlight The Bainbridge Country Club recently hosted its annual golf camp for area youth. The camp, which... read more