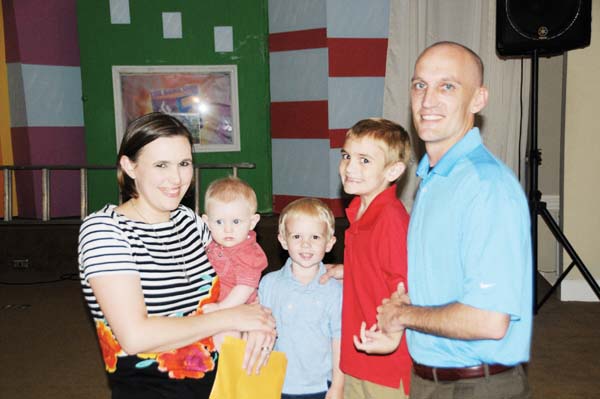 WELCOME TO GRACE: Tommy Yancey, the new athletic director at Grace Christian Academy, is moving to Bainbridge with his family. From left to right are wife Jenny, sons Dominic, Breckin and Dominic, and Yancey.

Yancey has more than 10 years of experience coaching basketball and has also coached baseball and soccer.

“The first thing you will notice about coach Yancey is that he is a people person with a deep love for people and for coaching,” said Charlie Strickland, Head of School at GCA. “Tommy is a Christ-follower who tries to live each day as an ambassador for Christ.”

At an informal meet-and-greet session on Wednesday, Yancey told GCA athletes and parents that he would encourage the school’s coaches to always have a positive attitude. He said he would work hard to raise money for needed uniforms, equipment and travel by building as many relationships as possible in the community.

Yancey said he was working to organize summer camps for GCA’s basketball and volleyball teams.

The boys basketball team was to attend a camp at Georgia Southwestern University this week. The girls team had to cancel attending an earlier camp, so Yancey said he would like to host one at Grace’s Perry Gymnasium later this summer.

Grace’s volleyball team will attend camp at Mobile (Ala.) University from July 8-10.

Yancey comes from a sports family. His father was a Major League Baseball player and ACC/SEC basketball official. Because of his father’s influence, Yancey said that he has a keen knowledge of athletics and the rules and practices associated with sports. He also lettered in baseball, basketball, football, and tennis in high school and was All-State in football and basketball.

Most recently, Yancey promoted health and wellness to students, faculty, and staff in his position as wellness coordinator at St. Johns River State College, which has three campuses in northeast Florida, and more than 8,000 students. He also recently worked as a part-time athletic coach and trainer.

Yancey is married to the former Ginny Mithen of Bainbridge, and they have three sons: Elliott, 7, Breckin, 3, and Dominic, 6 months.