BHS hoops tuning up this summer 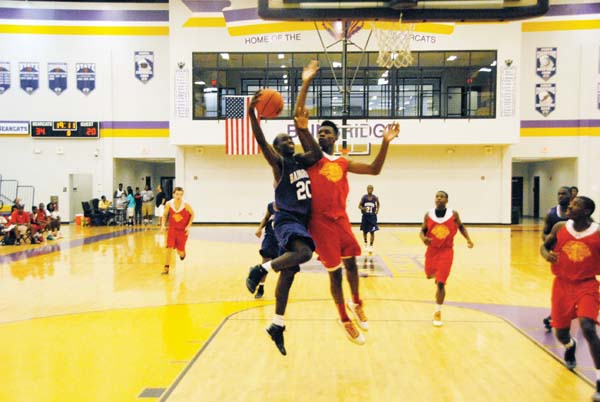 The Bainbridge High School varsity basketball team showed off their new high-tempo play style during a summer team camp competition on Thursday at the BHS gymnasium.

The Bearcats defeated the Thomasville Bulldogs 63-41 in a scrimmage on Thursday afternoon. The game consisted of two halves, each 20 minutes long, with a continuously running clock. Fouled players were only given one free throw shot.

Rising sophomore Tyree Crump was the offensive leader for the Bearcats, making multiple three-pointers during the game. There was also a time when Crump made a layup, stole the Bulldogs’ throw-in and made another layup.

The Bearcats ran a full-court press for almost the entire scrimmage, in an attempt to force turnovers, and also took every opportunity they had to make a fast break. On one possession, Douglas got a defensive rebound, dribbled all the way down the court and dunked.

McCullough said his goal is to take advantage of his team’s quickness this year in what he called a “high tempo.”

One potential weakness for the Bearcats this fall is that the team has no true “big man.” One of Thomasville’s returning starters was able to score at will from the low post during the scrimmage.

“We’re just going to have to try and adjust our gameplan for that,” McCullough said. “We can use double-teams and try to use our speed. That’s why we’re running the press, because sometimes we won’t be able to play a half-court game.”

The other issue with the emphasis on fast breaks is that some of the Bearcats’ passes missed their targets, resulting in turnovers, but McCullough wasn’t worried.

“It’s summer, so you’ll have some of that,” he said. “Some of these kids are younger, too.”

“We’re going to play up-tempo all summer, and I’m going to play a lot of people, trying to get my depth built up,” McCullough said. “We’ll play around 30 games like this between now and the end of June.”