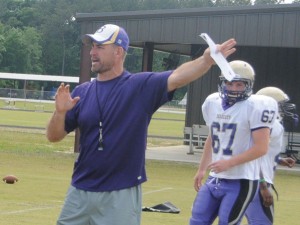 To view more photos from practice, check out our web gallery at https://www.thepostsearchlight.com/2013/05/06/bearcats-start-spring-practice/.

New Bainbridge High School head football coach Jeff Littleton said he was pleased with his players’ effort Monday during the first spring practice for the Bearcats.

“The effort was good and the enthusiasm was good,” Littleton said. “They were excited. They haven’t had a chance to play football or hit somebody in a while. They didn’t want to quit practicing, and that’s a good thing.”

Littleton said 128 players showed up for Monday’s practice, which was held at the BHS practice fields. The players were separated into small groups and moved from station to station, focusing on various drills that worked on fundamental skills, including agility, blocking and tackling.

“Our goal is to get fundamentally sound in our techniques,” Littleton said. “In these first few days, we want to work on our offensive and defensive positioning. We’re not trying to get our full offense and defense in, just yet. We’re trying to make small strides and to improve the little things.”

Although the focus of early spring practice is on fundamentals, Littleton did say that his coaches have already started installing some of the basic tenets of his offensive and defensive systems. The Bearcats had been coached by Ed Pilcher the last five seasons, but he resigned and is now the head coach at Berrien County. Littleton was hired in March, after previously serving as the defensive coordinator in Cairo.

“We started installing offense [Monday],” he said. “We had 20 minutes of an installation period, and a skeleton passing period where we did some throwing and running routes. We worked a little on our base defense. We did get that started.”

At one of the practice stations, newly hired defensive coordinator Brian Hill was instructing players on the proper technique to wrap up for a tackle. Assisting him was his father, Randy Hill, who has been a coach for more than 40 years and is working as a volunteer coach for the Bearcats.

“[Randy Hill] is a huge asset for us,” Littleton said. “He’s been coaching for 40 years and he’s been a defensive coordinator for about 35 of those. He’s seen it done a lot of different ways, and he’s seen it done the right way. I’m just excited that he can come out and help us.”

Littleton said he was impressed at how smooth his first practice day as Bainbridge’s head coach was, and he credited it to the organization and hard work of his staff.

“The coaches did a great job of getting everything organized,” he said. “Everything ran pretty smoothly.”

Bainbridge’s spring practices will continue over the next two weeks, culminating with an intra-squad scrimmage at 5 p.m. on Friday, May 17, at Centennial Field.

Melissa Mills placed second in the girls’ 200-meter dash and third in the 100-meter dash. Even despite a rainstorm and... read more