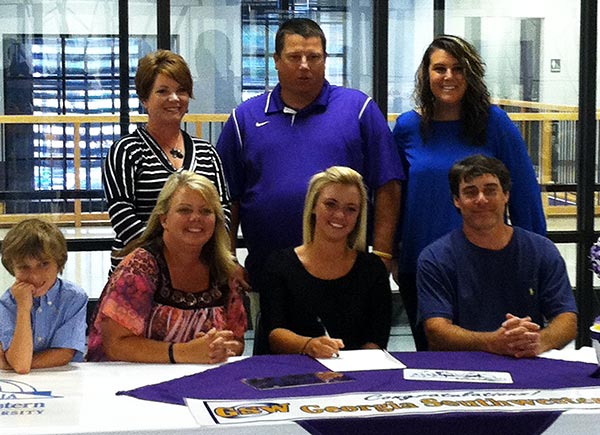 “I fell in love with the Georgia Southwestern campus and enjoyed practicing with the girls who are currently on the team,” she said. “I fit in well and just knew after going there that it was where I was meant to go.”

The Georgia Southwestern Hurricanes compete in NCAA Division II and are members of the Peach Belt Conference, which has 14 colleges and universities in Georgia, Alabama, Florida, South Carolina and North Carolina.

For such an outstanding player — she was undefeated against region opponents during her junior and senior years of high school — one might be surprised to learn Hilary didn’t take up tennis until she was 10 years old.

“I used to do beauty pageants when I was a little girl, but after my younger brother was born, my mom said we had to cut down on traveling,” she said. “At first, I thought sports were just for boys but I really liked playing tennis. Ironically, we’ve probably travelled a lot more for tennis tournaments than we ever did for beauty pageants.”

Originally from Tallahassee, Fla., Flournoy attended Florida’s virtual school in the mornings and spent the other half of her day attending the Seminole High Performance Tennis Program on the campus of Florida State University. She was part of a very selective small group that gave her the opportunity to train with FSU tennis coaches and players on a daily basis.

But with the goal of playing college tennis, Flournoy felt it was important to have experience playing for a school team, so she enrolled at Bainbridge High School for the 2011-2012 school year. She immediately became the No. 1 girls player, partly due to her powerful serve.

She also had a personal coach, Mitch Rogers, who helped her develop as a player, and credits BHS coach Amy Thomas for her leadership, as the Lady Bearcats have won back-to-back region championships.

“It really helped to play tennis for a big high school like BHS, both from a recruitment perspective and just considering the level of talent of the opponents we faced throughout our season,” she said.

In college, Hilary hopes to study to become a neonatal nurse.

Her parents are Terri and Drake Flournoy. She has a brother named Ben, 7, who also plays tennis.

Decatur County Special Olympics will host for the first time an expanded track and field event Thursday, May 2, at... read more