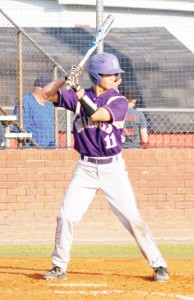 Bainbridge’s Ben Day had three hits and an RBI in the Bearcats’ Game 1 loss at Lee County on Friday.|Jeff Findley

The Bainbridge High School varsity baseball team narrowly lost both games of a double-header against Lee County, in Leesburg, Ga., this past Friday night.

The Lee County Trojans scored six runs on just five hits to beat the Bearcats 6-5 in Game 1. The Trojans then outlasted the Bearcats 2-1 in Game 2.

The Bearcats managed nine hits in Game 1, but were bitten by three errors.
Lee County struck first, scoring two in the bottom of the first, then had a big inning in the fifth with four runs.

The Bearcats rallied with three runs in the sixth and two in the seventh, but it wasn’t enough to win. Pitcher Rion Murrah took the loss for BHS, but struck out four.

Ben Day and Blake Voyles led the Bearcats offensively. Day had three hits and an RBI, while Voyles had two hits and one walk. Jake Goodson also had a walk and an RBI.

Voyles, Grant McDonald and Jordan Davis each had doubles for the Bearcats in Game 2, which went eight innings. Tate Lambert had two hits.

McDonald and Davis were also both hit by pitches. Day walked three times and had the Bearcats’ sole RBI. As a team, the Bearcats had seven hits and only one error, while the Trojans had six hits and three errors.

Bainbridge and Lee County each scored a run in their respective halves of the fifth inning, then the Trojans tacked on the winning run in the bottom of the eighth.

Pitcher Jake Goodson pitched 4 1/3 innings and took the loss for the Bearcats in Game 2. He struck out seven batters.

Davis and Matthew Burke also saw time on the mound for Bainbridge.

With the losses, the Bearcats’ season record is now 5-10.

They were scheduled to host Northview High School of Dothan, Ala., at the BHS Diamond on Tuesday, and will travel to Hamilton, Ga., for a doubleheader against region opponent Harris County on Friday.