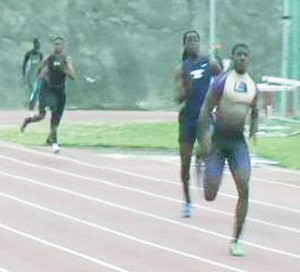 Bainbridge’s Marshall Mack approaches the finish line as the Bearcats win the 4-by-100 relay during Saturday’s Smith -Benson Relays.

The meet was held at Monroe High School in Albany, Ga.

Harris also placed second in the mile run, with a time of 4:49.70.
The Bearcats’ 4-by-100 relay team of Justin Baker, Greg Cooper, Marshall Mack and Terry Lewis won first place with a time of 43.22.

Other first-place finishers were Lewis, who won the 200-meter dash with a time of 23.07, and Craig Cooper, who won the high jump event with a jump of six feet.
Craig Cooper also placed fifth in the triple jump, with a total leap of 42 feet, eight inches, and eighth in the long jump, with a leap of 19 feet and one-half inch.

As a team, Bainbridge High School placed a strong second with 111 total meet points, just trailing behind Westover High School of Albany, who won with 149 points.

The Lady Bearcats finished ninth out of 18 teams competing at the Smith and Benson Relays.

“This meet was the most competitive meet for the girls all season,” Coach Larry Clark said. “There were some very talented teams competing.”

Raven Burney placed third in the long jump, with a leap of 15 feet, 11 inches.
Asia Thomas placed fifth in the shot put, with a throw of 31 feet, nine inches, and placed sixth in the discus with a throw of 85 feet, six inches.

The girls’ 4-by-100 relay team of Tereka Green, Tearnee Harvin, Jasmine Price and Deandrea Green placed seventh, with a time of 51.38.

The girls’ 4-by-400 team of Deandrea Green, Jasmine Price, Raven Burney and Tereka Green placed eighth, with a time of 4:32.77.