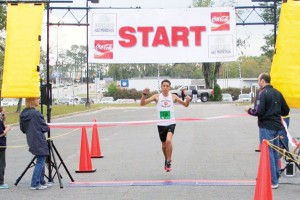 Nineteen-year-old Stanley Linton, of Crawfordville, Fla., crosses the finish line with the first overall time of 1 hour, 17 minutes, 27 seconds, in the second annual Bainbridge Half Marathon on Saturday.

Despite dealing with the stormy weather this past weekend, the second annual Bainbridge Half Marathon was a success, race director Andy Payne said.

More than 180 runners and walkers completed the 13.1-mile race individually or as a two-person relay team. There were runners from as far away as Ontario, Canada, as well as a large contingent of local runners. Billy Walker, CEO of Memorial Hospital and Manor, was the grand marshal for the race.

Nineteen-year-old Stanley Linton, of Crawfordville, Fla., came in first overall, with a time of 1 hour, 17 minutes, 27 seconds. Maryanne Grayson, 47, of Thomasville, Ga., was the top female finisher, with a time of 1:33:33.

Payne said the run was very well received, even though the weather got pretty rough after the two-hour mark.

“The plan was to leave the course open for four hours, to allow participants of all abilities to complete the full course,” Payne said. “But an approaching hailstorm caused the race to be called a little early. Many of the finishers did a great job and toughed it out, running quite well in the rain and wind. Only two runners weren’t able to finish.”

A “Kid’s Half” race, organized by April Aldridge, took place between showers, around 9:45 a.m. Payne said the kids’ turnout was great, and they had a great time running a mile on the course.

Payne also said that the volunteer support was excellent, and the participants had plenty of spectators, cheerleaders and well-wishers.

“We couldn’t have made the event happen without our volunteers and the generosity of our sponsors,” he said. “I want to thank our dedicated organizing committee, made up of Liv Warren, Leslie Stone, Carole Clenney, April Aldridge, and Leslie Harrell and others. Drew Hall, formerly of Bainbridge, designed our t-shirts this year, and they were a big hit with the runners.”

All proceeds raised by the event will go toward the Memorial Hospital Foundation. This year’s efforts of the Half Marathon and the Derby Night event, scheduled for April 19, will furnish the lobby and common areas of the soon to open Amelia Medical Plaza.