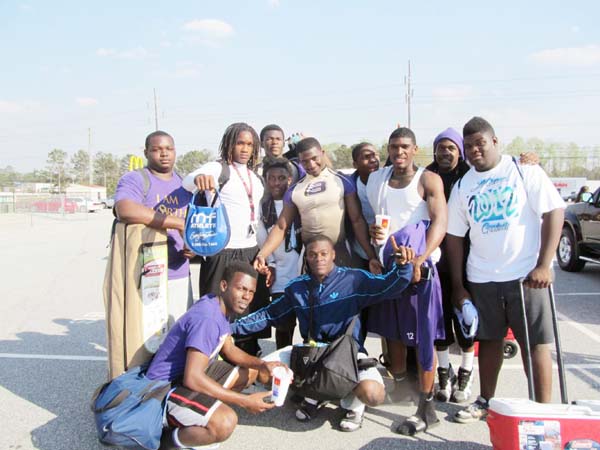 The Bainbridge boys’ track team were victorious at the Yellow Jacket Invitational meet this past Saturday in Thomasville, Ga.

Host school Thomas County-Central hosted a field of 16 teams in both boys and girls competition.

The Bearcats won the meet with a score of 132 points to second place Brooks County’s 95 points. The Lady Bearcats finished sixth with 42 points, trailing first place Westover High School, which had 126 points.

The boys’ 4-by-400 relay team of Derek Allen, Jovante Ross, Alton Miller and Justin Baker placed first with a time of 3 minutes, 29.49 seconds.

Lewis was also on the boys’ 4-by-200 relay team, which finished 3rd in a time of 1 hour, 34.58 seconds. Other members of that relay team were Damian Bouie, Greg Cooper and Craig Cooper.

Lewis teamed up with the Cooper brothers and Baker on the 4-by-100 relay team, which finished second in a time of 43.19 seconds.

Josh Sheard placed second in the discus with a throw of 140 feet, 11 inches.

Leading the way for the girls were Tearnee Harvin and Raven Burney, who finished third and fourth in the long jump, respectively, with jumps of 15 feet, nine inches, and 15 feet, two inches.

Porchia Green finished third in the high jump with a leap of four feet, 10 inches.

The girls’ 4-by-400 relay team of Deandrea Green, Jasmine Price, Burney and Tereka Green finished fifth in a time of four minutes, 25.24 seconds.

A PLACE OF HONOR: The Rev. Rudy Breunig displays the papal banner, in traditional colors of white and gold, which... read more