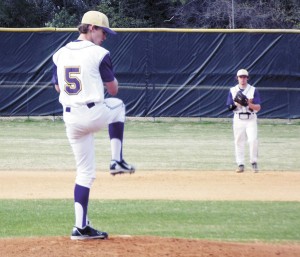 Anderson Bailey prepares to pitch for the Bainbridge High School junior-varsity team, while Dustin Strickland sets up on defense at second base, during the Bearcats’ 3-2 loss to Thomas County Central on Tuesday. | Submitted photo

Tyler Braswell pitched a complete game to earn the victory for the Bearcats on Thursday, while Nolan Haire, Anderson Bailey and Seth Hall led the offense.

Bailey finished with a double, triple and two walks, while Haire finished with two singles and Hall had a single and a sacrifice fly.

“Tyler pitched a good game and our bats came alive,” Bainbridge coach Christopher Bryant said. “It’s a big win for us. Hopefully we can build some momentum because we have quite a few games the rest of the month.”

The Bearcats took a 1-0 lead in the top of the third inning Tuesday.
Haire got aboard on an error to open the inning, moved up to second when left fielder Cervantes Jackson grounded out from pitcher to first, moved to third on an error and scored on a fielder’s choice.

The Yellow Jackets scored a run in the bottom of the third on a walk, an error and a double to tie it up 1-1.

They scored two more in the bottom of the fourth to go up 3-1. Two walks, an error and a single produced the runs.

The Bearcats scored their final run in the top of the sixth. Hall ignited the rally with a one-out single. He moved up to second on a single by third baseman Tyler Braswell, went to third on a passed ball and scored on an error.

“We pitched good enough to win, but our bats let us down,” Bryant said. “I liked what I saw from our defense and pitchers.”

The Walmart FLW Bass Fishing League (BFL) will be coming to Bainbridge on Saturday, March 16, according to a BFL... read more