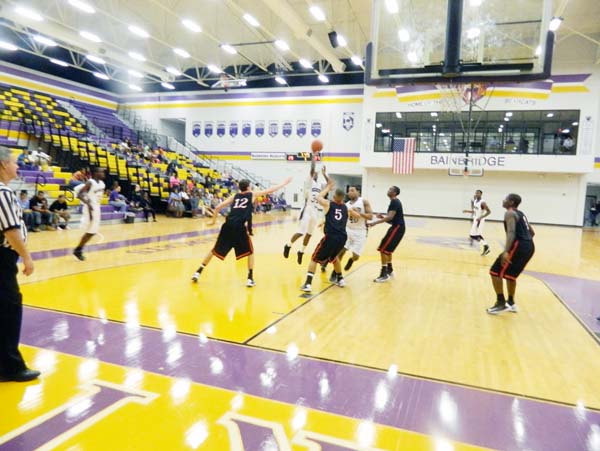 The Bainbridge High School Bearcats picked up a key Region 1-AAAAA win Tuesday night, defeating the visiting Lee County High School Trojans, 63-58, in overtime.
The victory improved the Bearcats’ record to 15-4 overall, and 6-1 in region play. As of Tuesday’s result, Bainbridge was in first place in Region 1-AAAAA. The Northside-Columbus High School Patriots, who Bainbridge were scheduled to host Friday night, were in second place with a 5-2 record in region play.
Bainbridge’s only region loss this season was at Lee County, who defeated the Bearcats 71-70 on Friday, Jan. 18. As of Tuesday, Lee County was fourth in Region 1-AAAAA, with a 3-4 record.
The Hardaway High School Golden Hawks, who the Bearcats play Saturday in Columbus, Ga., are third in the region, with a record of 3-3.
In fifth and sixth place in the region were the Harris County High School Tigers at 1-5 and the Thomas County Central High School Yellow Jackets at 1-6.
The top-two regular season finishers will draw a bye in the first round of the Region 1-AAAAA Tournament on Friday, Feb. 15, and Saturday, Feb. 16, in Bainbridge.
Tuesday’s overtime session began with Lee County’s Jaysyn Brown hitting one of two free throws with 3:56 remaining to put the Trojans up 56-55. Bainbridge’s Stephen Johnson then grabbed a rebound, put it back in, got fouled and hit a free throw with 2:11 remaining  to give the Bearcats a 58-56 lead .
A Dontavius Marshall layup at the 1:07 mark pushed the lead out to 60-56. Brown then hit two free throws to cut the lead back to 60-58.
The Bearcats scored the final three points to seal the victory. They came on a free throw by Justin Baker with 30 seconds remaining and two free throws by Marshall with 11 seconds remaining.
The Bearcats were led by Marshall, with 20 points, and freshman Tyree Crump with 16.
The Trojans’ Brown took game-scoring honors, with 25 points.
“Lee County is a very good team and  they match up well with us,” McCullough said. “We had a lot of players step up in the clutch tonight.”