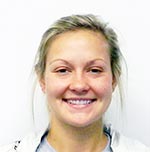 “Coach Woods has really helped me improve my game,” she said, during a visit home this week. “He’s played at many levels and has a great knowledge of the game,

“He played college soccer at Notre Dame and Clemson and played in the MLS for eight seasons. He also played Olympic soccer at the China games.”

Provence’s Bainbridge High School coach Chip Ariail, and her Middle Georgia coach Vinny Gill, both describe her as an outsanding student athlete who maintains a high-grade point average while excelling on the field. Provence played for Middle Georgia for two years and then transfered to Oglethorpe.

“She has really matured at the college level,” Gill said.

In January, she will be a legislative intern for Georgia State Rep. Darlene Taylor.