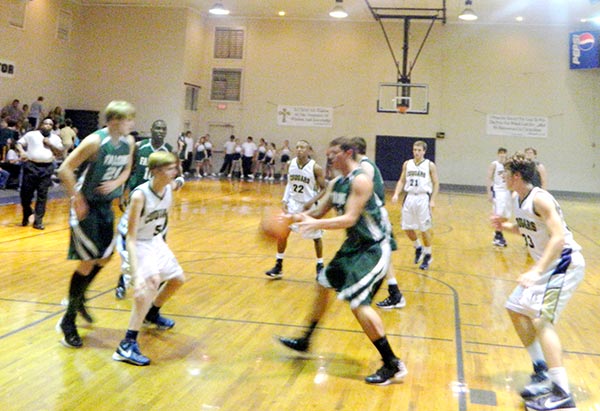 The Grace Christian Academy Lady Cougars and Cougars basketball teams split a pair of games with the visiting Ashford (Ala.) Academy Lady Falcons and Falcons on Monday night at Perry Memorial Gymnasium.

The Lady Cougars won 67-60, behind a season best 24-point performance by Emilee Murr. Murr was followed by Jasmin Kelley with 14 points, Kelsey Harrell with 11, Shelby Woodrum with 10, Hannah Wynn with six and Lindsey Duke with two. The Lady Cougars led 26-23 at halftime.

The Cougars, who were led by Jack McRae with 16 points, lost 58-52 to the Falcons, who were led by Alex Morris with 29 points. Behind McRae on the Cougars’ scoring chart were Phillip Bowen with nine points, Brent Noble with eight, Brent Warr with five and Bryce McQuaid with four.

“Tonight’s effort was exactly what our girls team needed,” coach Steve Murr said. “Ashford is a good team that likes to show full court pressure. We were much more prepared than we were the last time we saw that kind of defense.”

Murr was also proud of the effort his boys team put in Monday night.

“Our boys team trailed by just one point with eight minutes to go in the game, but could not pull off the win,” he said.

This football season has been ‘the revenge of the nerds’