Decatur County School System middle school football coordinator Scott Starr said Friday that he expects even more players to come out next week when the team dons pads for the first time. 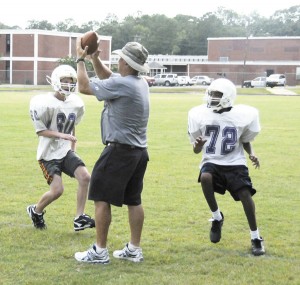 “There are several players who still need to get their physical forms filled out and turned in,” coach Starr said. “When everyone comes out we should have around 45 players.”

Starr, who coaches the eighth-grade Bearcats with Ell Willis and Mike Jones, a pair of former Bainbridge High School players, said he and his coaches are taking practice precautions because of the severe heat.

“We are giving the players frequent water breaks and also letting them take breaks in a shady area,” Starr said.

The eighth-grade Bearcats will open their season Thursday, Sept. 1, against the Thomas County Central Middle School eighth-grade Yellow Jackets at Central’s Jackets’ Nest Stadium. Kickoff will be at 5 p.m.