Eagle project helps the down and out 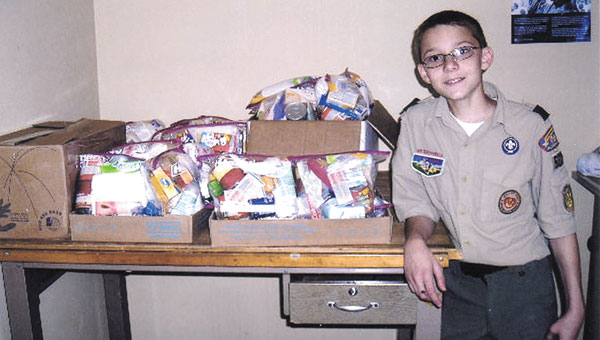 EAGLE SCOUT CANDIDATE TAYLOR COLON stands with some of the gallon-size bags stuffed with essentials a person may need if they are displayed from their home or if they are homeless. Colon raised enough to stuff the bags full of approximately 20 items and donate the extra cash—$868.44—to Family Connections. 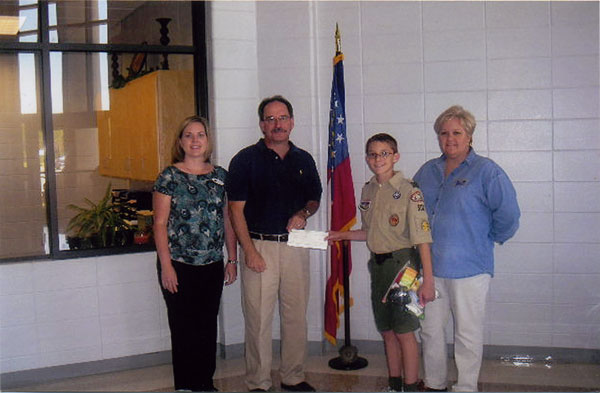 RECEIVING THE DONATIONS of the Eagle Scout project completed by Taylor Colon are, from the left, Allison Harrell and Ronnie Burke with the Family Connections, and Colon and his mother, Lee Ann Colon.

A candidate for his Boy Scout Eagle badge decided to help the down and out, and ended up exceeding his goals by more than $800.

Taylor Colon, the 14-year-old son of Lee Ann Colon, decided to fill gallon-size plastic bags of emergency essentials that can be handed out to the homeless and persons in need. The bags contain such essentials as a toothbrush, toothpaste, a snack, a wash cloth or bottled water.

Colon finished his Eagle project earlier this year and is awaiting word on final approve before he has his Eagle Scout ceremony. He is with Troop 502, which is sponsored by the Bainbridge Rotary Club, and it too helped him with the donations that filled more than 100 bags with approximately 20 items.

Each bag was also appropriately packaged and marked for adult males or females, or children.

Colon estimated the cost of the items for each bag was $11.

However, because of donations by the Rotary Club and others as well as some items donated by the Jameson Inn such as the travel-size toothpaste, the project garnered a lot of support.

He said he originally wanted his Eagle project to assist with the animal shelter or Humane Society, but other Eagle Scout candidates had done those projects. So his mother suggested this project, and “I thought it was a good idea.”

Ms. Colon, a Bainbridge High School science teacher, said she wasn’t aware of a homeless population so much as there were quite a few persons in the county who are displaced, such as some whose homes were damaged by fires or storms. She said she also carries some extra bags in the truck of her car in case she sees a need.

Colon, who will enter the ninth grade in August, wants to continue his scouting until he earns the palms that are in addition to his Eagle badge.