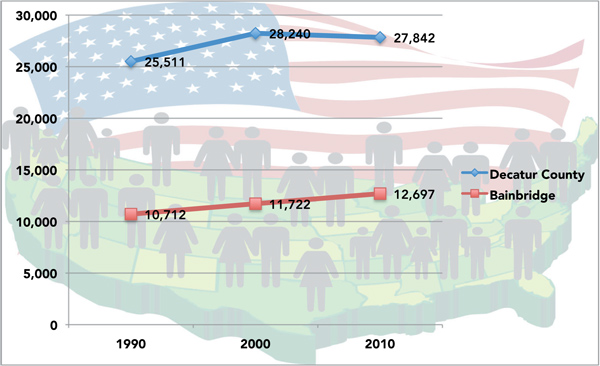 DATA FROM THE U.S. CENSUS BUREAU show that Decatur County decreased in population while the City of Bainbridge was the only municipality in the county to gain population. 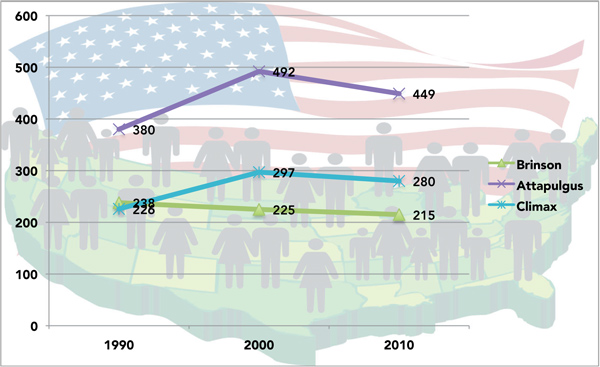 THE THREE MUNICIPALITIES in Decatur County all decreased in population.

The City of Bainbridge grew by 8.31 percent from 10 years ago, information from the U.S. Census says, while the county and the other three municipalities in Decatur County shrank in population.

As a whole, the 14-county southwest Georgia region gained only 1 percent in population, whereas in the last census, from 1990 to 2000, the region grew by 10 percent. In fact, nine of the 14 counties lost population, and the ones that gained population were Calhoun, Colquitt, Grady, Lee and Thomas.

At least one state House district in Southwest Georgia may be lost and the state Senate district will perhaps be larger in geographic size. The 2010 Census showed that most of the state’s population growth occurred around the Atlanta metro area, which will likely gain more seats in the Georgia House of Representatives and Georgia Senate and in the U.S. House of Representatives. The General Assembly is scheduled to convene a special session later this year to iron out the state reapportionment.

The information came from the U.S. Census Bureau’s redistricting data.

Decatur County’s racial makeup is 54.2 percent white, 41.1 percent black, 2.5 percent classified themselves of the population some other race, and 1.2 percent said two or more races.

That is almost reverse of what Bainbridge’s racial makeup is: 41.1 percent white and 54.7 black. 1.9 percent are some other race and 1.3 percent are two or more races.

In Climax, 62.5 percent of the population is white, 35.4 percent is black and 1.4 is some other race. There were no residents that classified themselves as being from more than one racial background. The data also showed that 213 of 280 are over the age of 18. Finally, there are 112 occupied housing units and 15 vacant housing units in Climax, the Census data showed.