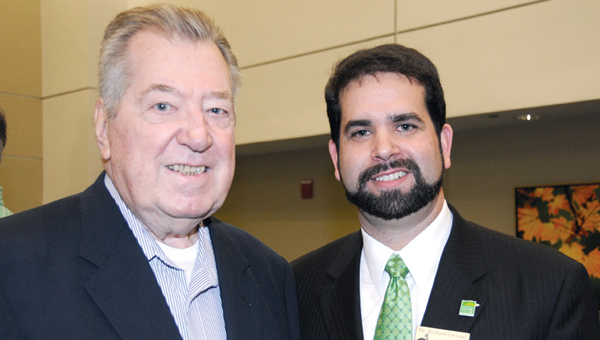 THE FIRST COLLEGE PRESIDENT, Ed Mobley, right, greets Bainbridge College’s fourth and newest president, Richard Carvajal, on Thursday. During the welcoming reception Thursday, Carvajal mainly outlined, in a light-hearted way, his background. However, at each chair was the college’s strategic plan that he recently completed.

With a bit of Irish in the air, Bainbridge College welcomed its fourth president and his family Thursday.

With decorations honoring St. Patrick’s Day, BC President Richard Carvajal, his wife, Cheryl, and their two children, Crystal, 10, and Brandon, 6, were greeted and welcomed during a light-hearted gathering at the Charles H. Kirbo Regional Center.

After shaking hands and greeting approximately 200 persons who attended the welcoming, a somewhat formal program introduced the Carvajals.

Professor Carol Adams told the college president how much his initial actions meant to the faculty and staff.

For example, after the first few days of his arrival on Jan. 10, Carvajal e-mailed each faculty and staff member asking them to write introductions of themselves so he can get to know them better and to open a line of communication.

“You have virtually shut down the BC rumor mill,” Adams said. She added that he has made such a positive impression on the staff and faculty that they hope the Carvajals will be very happy here for “a very long time.”

Tonya Strickland, who served as interim president between retired President Tom Wilkerson’s tenure and Carvajal’s arrival and was the chairman of the search committee, said the college community has been impressed.

Among the accomplishments so far is that Carvajal completed a strategic plan for the college, Strickland said.

When it was Carvajal’s turn to talk, he had a PowerPoint presentation that was light-hearted about his life, including picture of himself as a “happy baby” and as an “unhappy baby.” He even joked about a picture of himself in a dress, which was part of a costume in a play he was in during college.

He outlined his college career and his career working at various colleges.

He came to Bainbridge from Cascadia Community College, which is located near Seattle, Wash., which was ranked the second top community college in the United States. 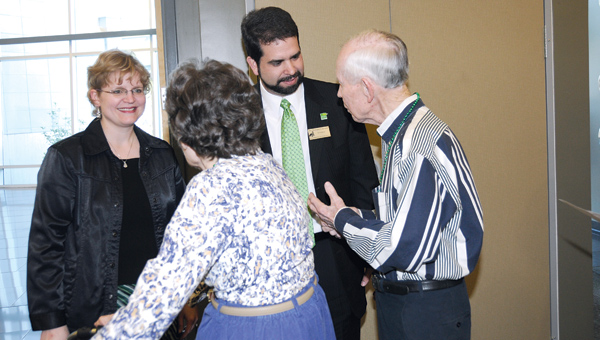 GREETING MEMBERS OF THE COMMUNITY are, looking to the camera, Cheryl and Richard Carvajal, the new Bainbridge College president and his wife. With their backs to the camera are Carolyn and George Daniel. The Carvajals’ two children, Crystal and Brandon, also greeted guests.