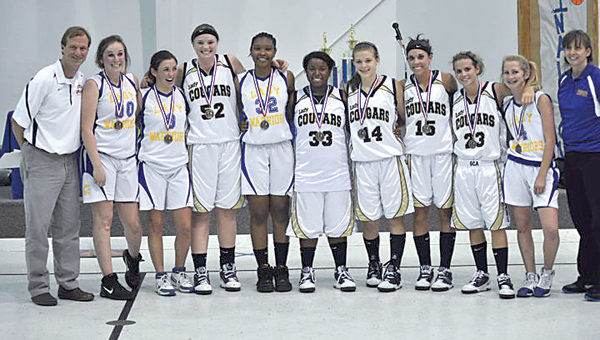 The game, played Saturday, February 19 at Aletheia Christian School in Pensacola, Fla., featured Brock Bailey scoring her 1500th career point in the first quarter. Bailey, a senior, has 1517 career points, the second highest in school history. She can still add to that total.

Grace Christian’s girls, who are now 20-8 on the season, will compete in the National Association of Christian Athletes’ Division III girls basketball tournament, to be held March 8-12 in Dayton, Tenn.

To get to the championship game, Grace’s girls defeated S.L. Jones Christian Academy of Pensacola. In the semifinal game, Brock had 19 points, Rachel Harrell had 15 points and Emma Heard had 10.

In the championship game, the Lady Cougars took the lead early, jumping out front 13-9 at the end of the first quarter.

Each team scored 17 second quarter points and the half ended with the Lady Cougars out front 30-26.

The Saints outscored the Lady Cougars 11-9 in the third quarter and went to the fourth quarter behind 39-37.

The Saints then outscored the Lady Cougars 23-17 in the fourth quarter to pull out the victory.

Leading scorers for the Lady Cougars were Brock with 20 points, including four three-pointers, Heard with 11, Harrell with eight and Christy Colvin with seven.

Harrell had 20 points, leading all scorers.