Teen with the golden voice 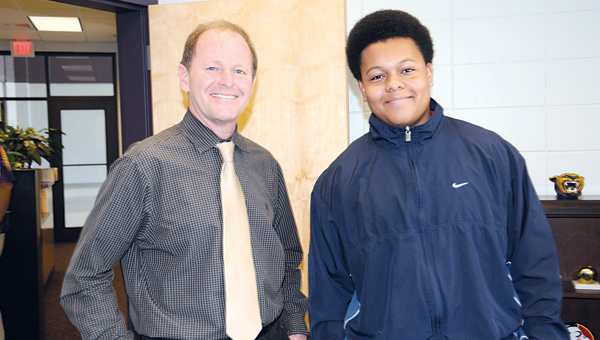 YOUNG ANNOUNCER FOR THE BEARCATS is Devin Thompson, on the right, with Bainbridge High School Principal Tommie Howell. Wednesday night is the last home game of the season for the Bearcats.

If you have been to a Bainbridge High School basketball game this season, there’s a new addition that has added some excitement to the games.

Besides the three-pointers or slam dunks by Devon Baulkman or the barreling-to-the-basket moves by Shawn Samuels or Rodney Glenn, there’s the booming play-by-play PA announcements by Devin Thompson.

And it’s not just the reading of the names of the players and what they did.

It’s the emphasis of “Baulkman” or the drawn out and echoing of “slam dunk” that Thompson announces over the public address system at the new gymnasium.

Even more notable, with a mature presence and an even more mature voice, Thompson is only a 15-year-old ninth-grader at Bainbridge High School.

BHS Principal Tommie Howell said Thompson has accentuated the excitement of the Lady Cats’ and Bearcats’ successful basketball games this season because of his announcing abilities.

And when basketball season started, head coach Rickey McCullough approached Howell to see if the Bearcats could use Thompson to introduce the players before each game, announce the plays during the game and operate the public address system during the game, including playing music during warm-ups and halftime, Howell said.

After Thompson did one of the Bearcats’ first games, Lady Cats head coach Latreisha Moon then asked if Thompson could do the girls’ games as well.

Thompson said he didn’t know much about basketball, so he read a relatively thick book on the rules and what actions constitutes foul. Football is his favorite sport to watch, he said. He’s been approached to do some of the baseball games and perhaps even some of the Bearcats’ football games.

Thompson, the oldest of two sons by Shelita Thompson of Bainbridge, said he doesn’t do anything different to his voice while announcing the games. He said his voice has come honestly to him.

In fact, it started in the fourth grade while at Jones-Wheat Elementary School when he was asked to participate in the Black History program. He was asked to read Martin Luther King Jr.’s historic “I Have a Dream” speech during an assembly, and he remembers after he read that speech that everyone in the auditorium stood up and applauded.

That inspired him, and apparently it touched others as Thompson was asked to do other announcing duties that included Christmas and Black History Month programs throughout elementary school and the added duties of Honor’s Day programs at Bainbridge Middle School.

Other inspiration has come from his grandparents, Acie and Melanese Johnson, who was the first black woman to work at a bank in Bainbridge. Mrs. Johnson also worked for Georgia Power for 21 years.

Thompson is also quick to give credit to the teachers who have worked with him along the way.

He said he wants to be a lawyer, but broadcasting is also a possibility. His favorite subject in school is math.

And his least favorite?