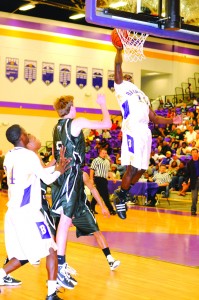 Baulkman led the way with 23 points, Samuels added 17 and Glenn had 10.

The Bearcats will host a second-round state Class AAAA game next week. It has tentatively been set for 7 p.m. Wednesday. They will play the winner of tonight’s game between Lovejoy High School of Hampton and Brunswick High School.

Bainbridge built a commanding 40-23 half-time lead. They built their lead to as many as 30 during the second half.

Leading the way for the Chiefs were Alex Anderson with 11 points. He was followed by Mike Waldon who had nine and David Bosly with eight.

Bainbridge coach Rickey McCullough said he thought his team controlled the tempo of the game.

“We came out with our up-tempo game and forced McIntosh to play at our tempo, and they had trouble doing it,” he said. “We made a lot of shots early and pretty much dominated the rest of the way.”

This is the Bearcats first step toward a possible state championship.

“The competition gets tougher each round, and I know Lovejoy and Brunswick both have outstanding teams, and I know we will have to play our best to keep advancing,” McCullough said.

Point guard Rohan Gaines did a good job of dishing the ball out to the shooters, McCullough added.

Behind the top three Bearcat scorers were Ronald Crawford with eight, and Jamar Venisee-Cosby and Adam Taylor both had three.