The Bainbridge High School Lady Cats are on to the Region 1-AAAA girls basketball championship, after defeating Hardaway 69-64 in Bainbridge on Friday night.

However, the Lady Cats will have to manage without point guard Briana Wade, who was ejected from the game and will have to miss the team’s next two games, including Saturday’s championship game. Wade will also have to miss the first round of the State AAAA basketball playoffs, which will be hosted by BHS. 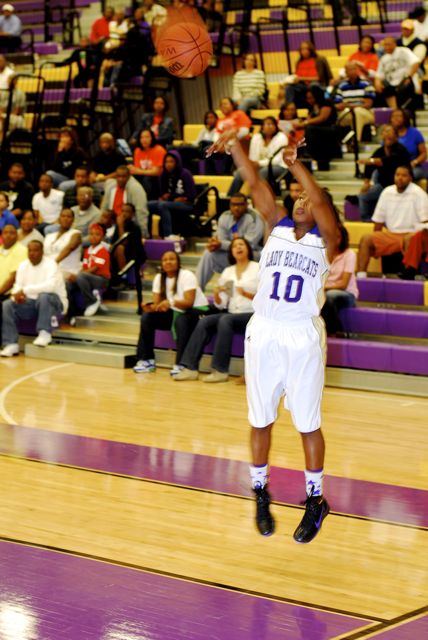 The Lady Cats, who are now 21-5 on the season, started strong and were leading 18-3 with a little more than 2 minutes remaining in the first quarter. However, Hardaway’s Lady Golden Hawks came back quickly, trailing only 21-14 after the first quarter.

The Lady Cats were leading by six, 43-37, with 3:10 left in the 3rd when BHS’ Wade was called for a technical foul. While the technical foul shot was being set up, an apparent verbal exchange between Wade and a referee resulted in her being called for a second technical foul, which meant she was automatically out of the game.

Hardaway got to shoot four technical foul shots and made three, to pull the score to 43-41 in BHS’ favor. Hardaway also got possession of the ball after the foul shots and quickly scored to tie the game at 43-43. The game remained tied at 48-48 after three quarters. 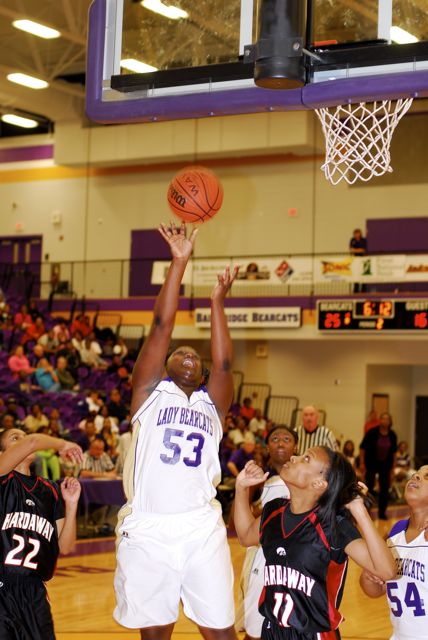 A Hardaway free throw narrowed the score to 62-59. Thomas hit a jumper but then Hardaway countered to make it 64-61 in BHS’ favor.

Thomas was fouled with 24.4 seconds to go and made both free throws to make it 68-61 in the Lady Cats’ favor.

Play was temporarily halted with 8.7 seconds to go when a minor fight broke out in the upper portion of the general admission seating. Bainbridge Public Safety and Decatur County school resource officers quickly brought the situation under control.

Thomas made a free throw to make it 69-61. The Lady Golden Hawks made a three-pointer just before the game ended, making the final score 69-64.

Leading scorers for the Lady Cats were April Thomas with 25 and Bria Harris with 24.

The Lady Cats will play Warner Robins in the girls’ championship on Saturday at 7 p.m. at the BHS gym.

If the BHS Bearcats, who were leading Northside-Warner Robins 39-21 at halftime Friday night, end up winning, they will play Thomas County Central in the boys’ championship. TCC upset Hardaway 64-56 earlier on Friday. BHS’ boys defeated TCC twice during the regular season.

The boys’ championship is scheduled for 8:30 p.m. Saturday at the BHS gym.