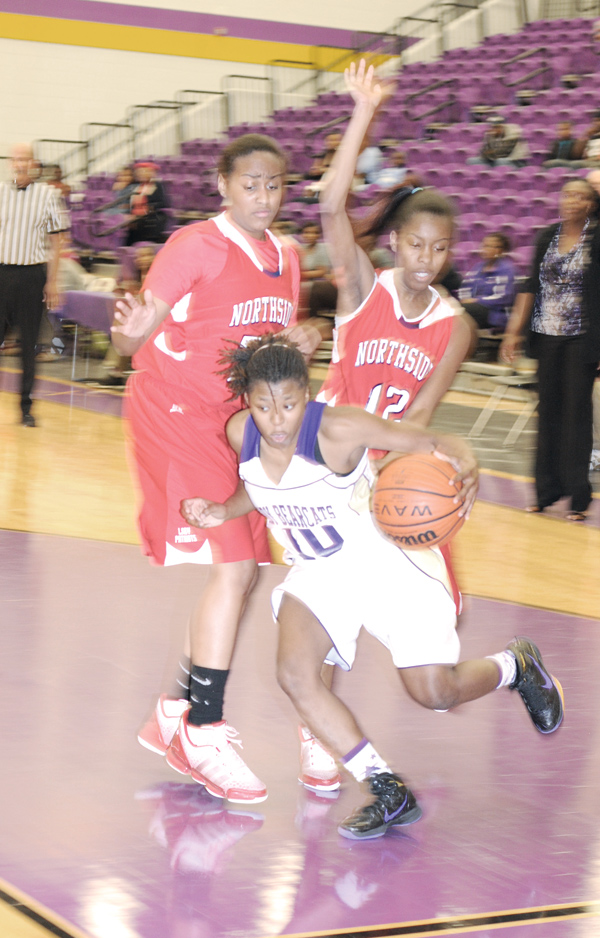 Saturday’s Region 1AAAA tournament girls’ games here will feature the consolation game for third and fourth place at 4 p.m. and the championship game at 7 p.m.

On Tuesday, Thomas led the way for the Lady Cats with a game-high 22 points Tuesday night. Harris added 12 and Kelly put in 10. Briana Wade sealed the victory when she connected on the first of two free throws with just 2.1 seconds remaining on the clock.

When she missed the second free throw, the Lady Patriots got the rebound and misfired on a desperation heave down court.

With 1:54 remaining in the game, the Lady Patriots Tiera White hit two free throws to give her team a 50-49 lead. Harris put in a field goal with 1:15 remaining to reclaim the lead for the Lady Cats at 51-50.

Thomas followed with a layup off the right glass with 12.2 seconds remaining to increase the lead to 53-50.

Following a Lady Patriots time out, Hope Thomas hit a long two-point jumper from the right side with 11.4 seconds remaining to get the Columbus visitors to within one, at 53-52, and set the stage for Wade’s game-clinching free throw,

Kelly grabbed a rebound and put it back in with 22 seconds remaining to give the Lady Cats a 14-11 lead at the end of the first quarter.

Early in the third quarter, at the 6:04 mark, Khamiyah Crawford hit a field goal to pull the Lady Patriots even at 17-17.

Thomas countered with a three-point jumper out front at the 5:48 mark to put the Lady Cats back out front 20-17 and they went on to lead 24-20 at halftime.

A free throw by Thomas with 20 seconds left in the third quarter sent the Lady Cats to the final quarter with an eight point, 41-33 lead.

“We played well tonight, but Northside of Columbus has a very good team,” Lady Cats coach Latreisha Moon said after the game. “With an eight-point lead at the end of the third quarter, I think we might have thought we had it made and let up a little in the fourth quarter. It almost cost us.”