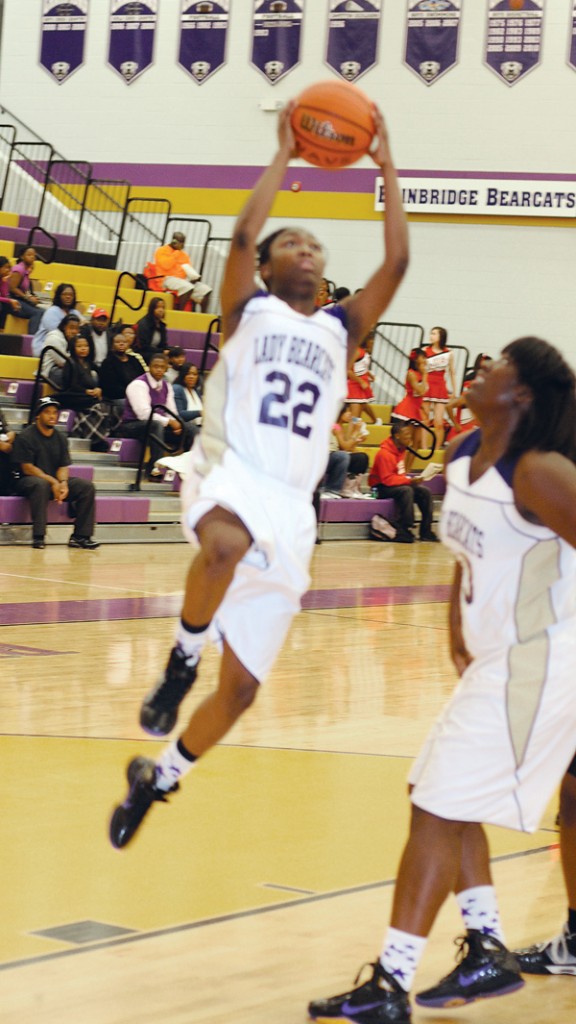 April Thomas and Bria Harris combined for 43 points Saturday night in Cairo to lead the Bainbridge High School Lady Cats over their rivals, the Cairo High School Syrupmaids, by a 65-55 score.

Thomas led the way with 23 points and Harris put in 20. The Lady Cats concluded their regular season with a 19-5 record.

They opened Region 1AAAA Tournament play with an 8:30 p.m. Tuesday game at the BHS Gymnasium against the North Sub-Region number four seed, the Northside Columbus High School Lady Patriots. At 4-0, the Lady Cats are the top seed in the Region 1AAAA South Sub-Region.

Also in the Lady Cats’ scoring column Saturday night in Cairo were Briana Wade with nine, Ri’Chana Jackson with six, Aleah Clark with two, and De De Cooper with one.

Leading the way for the Syrupmaids were Canresha Baker with 14 and Alexis Tise with 12.

On Monday, Lady Cats Head Coach Latreisha Moon said she thought her team had a solid defensive effort against the Syrupmaids.

“When you play good defense you always have a chance to win,” Coach Moon said. “We could be peaking here at tournament time and that would be very good.”

If they win Tuesday night, the Lady Cats will play Friday night at 7 p.m. against the winner of the Hardaway – Thomas County Central game.