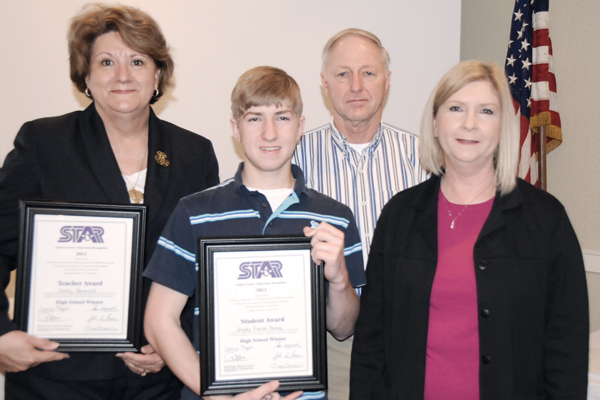 GRACE'S STAR STUDENT is surrounded by family and his pick for the STAR teacher. From the left, are STAR teacher Kathy Bennett, STAR student Tad Young, and his parents, Karl and Faye Young.|Carol Heard

The two Decatur County seniors who had the highest SAT score at their schools and are in the top of their class were recognized Thursday.

David Nathanial Golladay of Bainbridge High School and Tad Young of Grace Christian Academy—as well as a teacher each picked—were honored at the Bainbridge-Decatur County Chamber of Commerce breakfast.

Assistant Superintendent Suzi Bonifay said the STAR student and teacher program is in its 53rd year. To be a STAR student, high school seniors must have the highest score on a single test date on the three-part SAT and be in the top 10 percent or top 10 students of their class based on grade point average.

The STAR student then picked the teacher he or she feels has been the most instrumental in their academic development. Golladay picked BHS science teacher Margaret Nour, and Young picked English and language arts teacher Kathy Bennett from Grace. 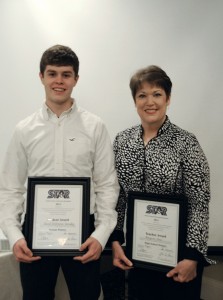 Golladay was also chosen as the Decatur County STAR nominee, who will continue to compete in the regional and perhaps state levels.

The son of Carolyn Hax and Stephen Golladay, the younger Golladay said he wants to attend the University of Georgia or Mercer University and study engineering or psychology.

Bonifay said Golladay is a member of the National Honor Society and cross country team, and he was nominated in every area for Governor’s Honors. He made the highest score at BHS for the science graduation test and a perfect on the SAT critical reading section.

He and Young both received their Eagle Scout ranking from Troop 502 in May 2007.

Nour complimented Golladay as being a well-rounded student.

“He’s a wonderful thinker. He’s a good problem-solver. He’s well-rounded,” Nour told the breakfast gathering. “A lot of times you see children who are very bright, and they may be bright but don’t get along with people. But David gets along well with students. He’s in athletics, so I think he’s a very well-rounded student. I’m so honored he chose me.”

Golladay said he chose Nour because in the three different classes that he’s taken from her, he’s always had fun in her classes and learned a lot.

“Outside of class, she’s been very helpful in getting my college applications together, even at the last minute for a few of them,” Golladay said, bringing a chuckle from members of the audience.

Grace’s STAR student Young is also a member of the National Honor Society and was recently named a Daughter of the American Revolution’s Good Citizen Award recipient. He is the son of Karl and Faye Young of Bainbridge.

Young said he wants to complete an associate’s degree at Bainbridge College then transfer to Berry College or Georgia Southern University to pursue a chemical or physical science degree and eventually become an engineer.

Bennett said, “Everyone wants to be at the top of their class, and Tad is certainly that.”

She also cited Young’s Eagle Scout and his patriotism and character.

“This young man has such a heart for service, and he is also respected by his peers,” Bennett said.

Young said he picked Bennett his STAR teacher because “she encouraged me in not only the subjects that she taught, but also in every other subject. She pushed me to do my best.”

• Georgia Power sponsored the breakfast. Area Manager Joe Truhett talked about who does what at the local Georgia Power office, which he said touches eight other counties.

• The duck race during the annual River Town Days will no longer be a part of the event. There will be a pirate ship, boat parade and trout pond.

• The Pars for Paws Sam Howell Memorial golf tournament is scheduled for Feb. 21. The entry fee is $50.

• The Rotary Club is holding its Casino Night on March 3 at the Kirbo Center.