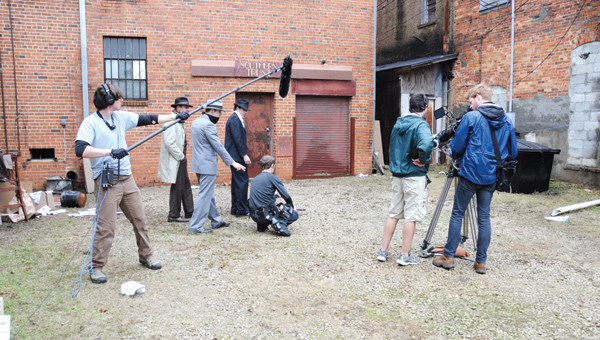 READYING FOR ACTION, Florida State University film school graduate students are set to shoot a scene behind Alderman’s on Tuesday. Later, the 17-member crew was scheduled to film a scene on West Street.|Carol Heard

Bainbridge’s historical downtown offered the setting—once again—for a film set back in time.

On Tuesday, Florida State University graduate students in its film school used areas of the downtown to film a movie set in the 1920s and ’30s.

Granted, the FSU graduate’s film is not the full-scale movie on par with “Fishers of Men” that was filmed last summer and fall in Decatur County and Bainbridge, but Tricia Mears, a FSU graduate students and the producer of the film, said the building facades of Bainbridge’s downtown offer a perfect setting for a time-period movie.

She said the production of the approximately 15-minute film took months, including working with the City of Bainbridge to close off West Street Tuesday, and to have permission from the fire department to perhaps wet the street down further, despite the rain on Tuesday.

West Street along Willis Park was closed off Tuesday so fellow students and volunteers could remove benches and decorate the windows and other aspects of the area to resemble the 1920s and ’30s.

The actual filming on West Street was scheduled for Tuesday evening, and Mears said she is hoping the streets will remain wet and the rain will have continued to fall. If the streets aren’t wet enough, Mears said she has permission from the city for the fire department to spray water on it.

A portion of the filming in Bainbridge also occurred behind Alderman’s store on Broad Street.

Mears said the director, Gef Gove, a fellow FSU film school graduate student, looked for locations in Tallahassee, Fla., but said Bainbridge’s downtown offered the setting he wanted for an at-night scene involving the apprehension of a bank robber.

The actual shooting of the film is scheduled for six days, but only one day of shooting in Bainbridge.

The film is part of the graduate students’ thesis and it is hoped that they will receive an A for the project. The film’s shooting, editing and other details are scheduled to end in May, and then in August, the film will be sent to various film festivals.