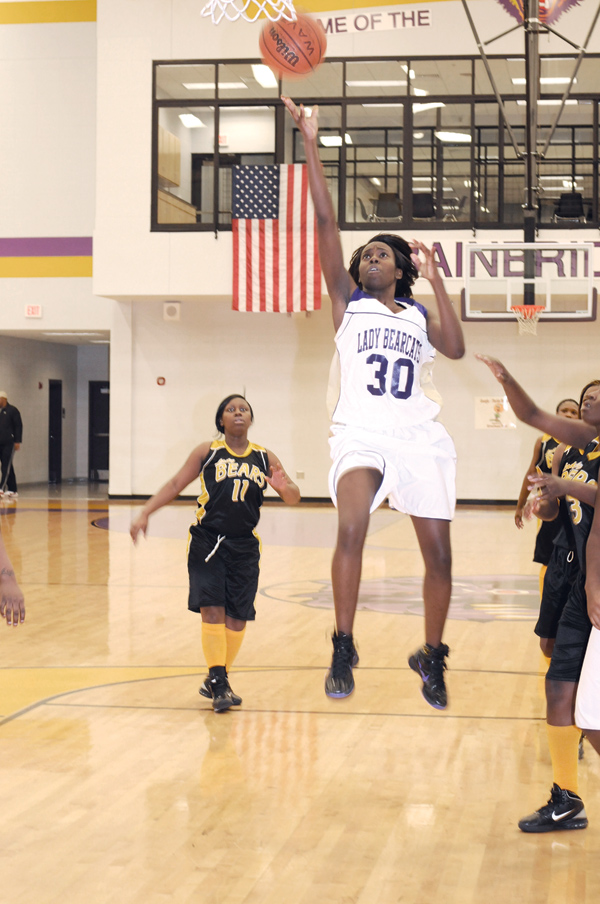 BAINBRIDGE LADY CAT Diamond Bouie splits the defense and goes up for an uncontested shot in the lane against the Baker County High School Lady Bears.|Carol Heard

Harris led the way with 16, and Thomas put in 15. It was their hot, early shooting that led the Lady Cats on a game-opening 13-0 scoring run.

After Jasmine Kelly hit a free throw just 43 seconds into the game to put the Lady Cats up 1-0, Thomas hit two free throws at the 7:07 mark to make it 3-0.

The advantage increased to 5-0 when Ri’Chana Jackson, who scored 8 points, grabbed a rebound and put it back in at the 6:22 mark.

Harris and Thomas then took over, scoring the next six points to push the lead out to 11-0.

The Lady Bears finally broke the scoring ice when Precious Miller hit two free throws at the 4:06 mark to cut the Lady Cats lead to 13-2. The Lady Cats led 24-6 at the end of the first quarter.

Thomas hit a long three-point shot from the left side to just beat the second-quarter buzzer and send the Lady Cats to halftime with a 42-21 lead.

After the game, coach Moon said she thought her team played better man-to-man defense than they had in other recent games.

The Lady Cats will return to action Friday when they host the Colquitt County High School Lady Packers at 6 p.m.