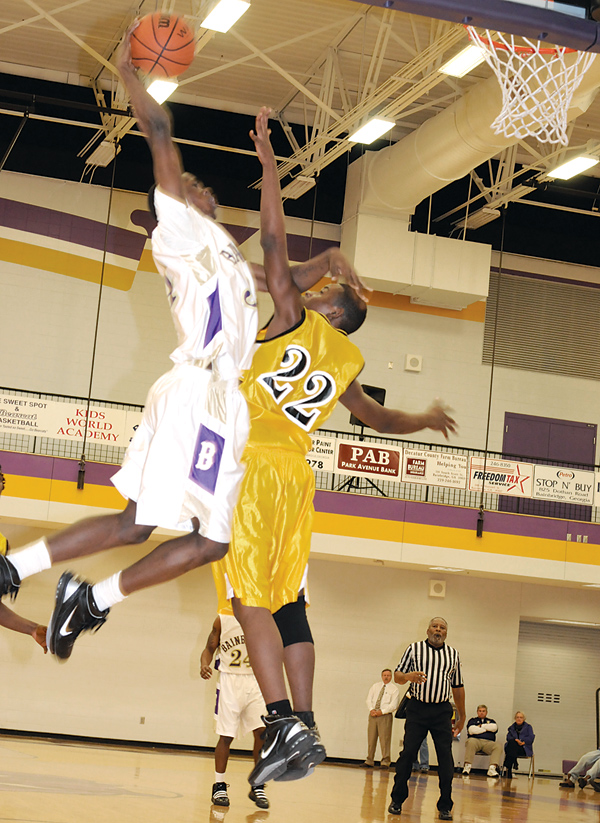 Devon Baulkman poured in a game-high 23 points, and Paul Chukes contributed 13 points and 10 rebounds to lead Bainbridge High School to a 98-32 victory over Baker County at home Tuesday night.

The win improved the BHS varsity boys basketball team’s record to 10-2. The game was never in doubt after the Bearcats pulled out to a commanding early 15-0 lead. 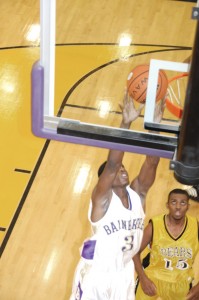 RODNEY GLENN prepares to put in a layup for the Bainbridge High School Bearcats Tuesday night in front of the Baker County High School Bears Jeremy Jones, No. 3.|Carol Heard

Rodney Glenn, who scored 18 points, hit a layup at the 6:00 mark to give the Bearcats their first double digit lead at 11-0.

The final two points of the 15-0 run came on another layup by Glenn at the 5:16 mark and a fast-break layup by Baulkman at the 5:10 mark.

The Bears finally scored and cut the Bearcats’ lead to 15-3 when John Butler grabbed a rebound, put it back in, was fouled, and stepped to the line and hit a free throw with 5:06 left in the first quarter.

Glenn’s layup off the right glass with 4:29 left in the third quarter gave the Bearcats a commanding 70-26 lead.

With the Bearcats leading by 60, at 89-29 after three quarters, the fourth quarter was played with a non-stop running game clock.

“We had a good effort and everybody got a chance to play,” Coach Rickey McCullough said after the game.

The Bearcats returned to action this weekend, taking on the Colquitt County High School Packers at home on Friday night.

On Saturday night, they will be traveling to Tallahassee, Fla., for a 5:30 p.m. game with the Lincoln High School Trojans.