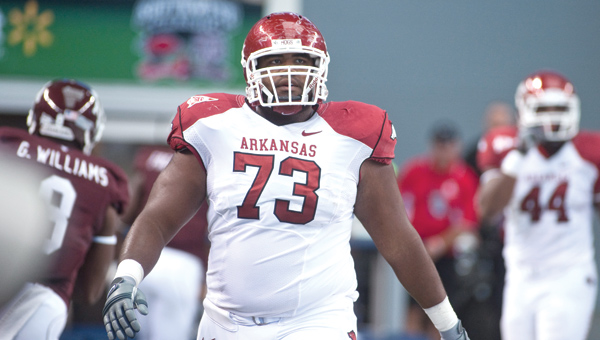 They will be going up against coach Jim Tressell’s Ohio State University Buckeyes.

Kickoff will be at 6:30 p.m. EST in the Louisiana Super Dome. The game will be televised by ESPN.

Dominguez, who is 6-foot-4 and weighs 329 pounds, is in his third year as a starter.

During his redshirt freshman year of 2007, Dominguez backed up All-American Robert Felton at left tackle and played in six games.

During his sophomore year of 2008, the former Bearcat started 10 games at left tackle.

As a junior in 2009, Dominguez started 10 games and played in 12. He missed the game with the University of Mississippi Rebels due to injury.

Last spring in the Razorbacks Red and White Game, Dominguez started for the White team and blocked for an offense that picked up 163 yards on the ground and 246 yards through the air while scoring four touchdowns and kicking a field goal.