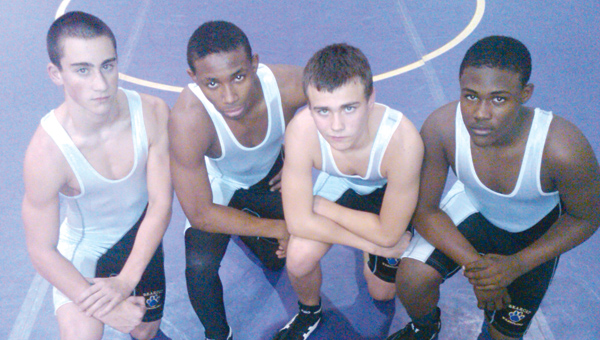 “This year the team was given a list of the 42 team members and asked to choose the top three candidates that they felt would lead, be the most dedicated to winning and show academic leadership,” Coach Smith said. “When I tallied up the votes, all five selected captains finished in a tie. With a 42 man roster, I could use an extra captain or two.”

Each team captain has at least three years experience and they have a combined record of 22-3.

Coach Smith calls Merchant, who is an eighth grader and tips the scales at 135 pounds, his most coachable wrestler.

“Blake Merchant shows great leadership both in and out of wrestling,” coach Smith said. “He maintains good grades and has a clean discipline record at school. He is a true leader.

“Hayden Guy, son of former Bainbridge High School Bearcats head football coach Greg Guy, weighs 121 pounds. He knows what it takes to be a role model and leader for his peers. He is currently the only wrestler on our team who is registered and participates in USA wrestling around the country.

“Curt Marshall, at 145 pounds, is a young man with limitless talent and strength,” Coach Smith said. “He goes into matches almost as if he were a man among kids. He is a great example of our weight room dedication.”

Dalin Mack, who weighs 155 pounds, is described by coach Smith as a wrestler who listens, performs and lets his ability speak for itself.

“Dalin Mack is the quietest and calmest of the group and that is a good breath of fresh air for the other guys on the team,” he said.

“Finally, Grayson Heard who is our lightest captain at 92 pounds, has the drive and fire to be the best no matter the size of the competition. He may be the smallest wrestler, but he definitely has the largest heart. I am very proud of all five of our team captains.”