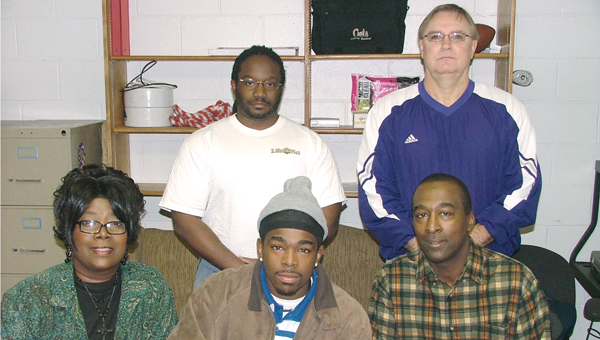 FORMER BEARCAT Andre Conner signs a football scholarship with he Minnesota Community and Technical College Yellow Jackets with his family and coach looking on. By his side are his mother, Kimberly Conner and his father Andre Conner Sr. Behind him are his uncle, Torrence McNelson, and Coach Carl Elliott.|Joe Crine

Conner was an All-Region 1AAAA outside linebacker for Bainbridge High School in 2008.

Carl Elliott, who was co-defensive coordinator on former Coach Greg Guy’s Bearcats staff and linebackers coach under current Coach Ed Pilcher, was contacted by Conner about helping him find a scholarship.

Coach Elliott said he encouraged Conner, who continued to come in and work out with weights, not to get discouraged. We kept sending film, put together by [middle school football] Coach Chip Ariail, to college coaches,” Coach Elliott said.

Elliott said Coach Brad LaPlante of Minnesota Community and Technical College had watched Andre on film and was impressed.

“He said he liked the way he came off the edge and got after the quarterback,” Elliott said. “That is the way Andre played for us. He was quick and he always gave a 100 percent effort. His motor never stopped running.”

Looking on as Conner signed Monday in the middle school weight room office were his parents, Kimberly Conner and Andre Conner Sr., his uncle Torrence McNelson and Coach Elliott.

“My parents, my uncle, Coach Elliott and a very special lady named Vontrail Fletcher have all been positive influences in my life,” Conner said. “I want to go to Minnesota and make them very proud.”

CAPTAINS for the Bainbridge Middle School Bearcats wrestling team are ready to lead. From left to right are Blake Merchant,... read more