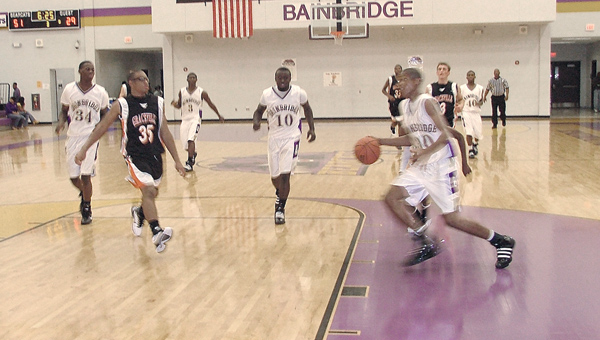 TREA KELLY of the BHS varsity basketball team drives to the basket during Monday night’s Georgia-Florida Shootout game against the Graceville (Fla.) High School Tigers. No. 10 is Shawn Samuels and No. 34 is Devon Baulkman. |Joe Crine

The Bainbridge High School Bearcats won 78-43 over the Graceville (Fla.) High School Tigers in the opening day of the two-day Georgia Florida Shootout being hosted at the new BHS gym.

Devon Baulkman led the way with 21 points and Rodney Glenn scored 20. Kevin Potts was the high scorer for Graceville with 15.

The Bearcats were to complete the shootout with a Tuesday game against Niceville (Fla.)

Baulkman gave the Bearcats an early 6-1 lead when he laid one in off the right glass with 6:56 left in the first quarter.

Potts opened the second quarter for Graceville with a layup off the left glass to pull his team even at 19-19.

The Bearcats built their lead to 10, at 31-21, when Ronald Crawford hit a layup off the right glass with 4:07 left in the second quarter.

Other Bearcat scorers were Crawford with eight points, Chukes with seven, Shawn Samuels and Greg Lee with four apiece, Quincy Fortson with three, and D.J. Stubbs, Greg Lee and B.J. Cheatem, all with two.

After the game, Bearcats head coach Rickey McCullough said he was pleased with his team’s performance.

“I thought we moved the ball around well and got it to the open man,” the Bearcats head coach said. “[Graceville head coach] Thomas Register played for me when I was head coach at Chipley Florida High School and he is doing a good job. They played hard and well, but it just came down to the fact that we had more talent than they did.”