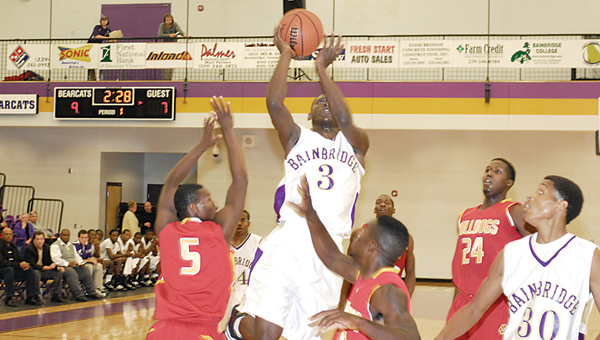 The loss drops the Bearcats season record to 3-2 and evened their two-game series with the Bulldogs at 1-1. The Bearcats downed the Bulldogs 75-74 Saturday in Thomasville.

Trey Gosier led Tuesday’s Bulldogs attack with a game-high 20 points. He was followed by Willie Clayton with 19 and Carlton Butts and Robert Carter with 14 apiece.

Rodney Glenn then got hot, pumping home the first eight points of the third quarter to pull the Bearcats even 27-27.

They pulled within six, at 51-45, when Devon Baulkman hit a three-point jumper with 6:37 left in the game.

After the game, Bearcats coach Rickey McCullough said the Bulldogs are a very good team and deserved the win.

“Thomasville has size down low and good guard play,” McCullough said. The size the Bearcats coach is referring to is 6-foot-8 Clayton and 6-foot-9 Carter.

“We did not have a good shooting night overall,” McCullough continued. “We were just three of 25 from three-point range.”

Glenn, who led the Bearcats in scoring with 23 points, got in foul trouble early and that hurt the Bearcats some, the coach said.

“Thomasville and our team could both have very good seasons. It just depends on who stays healthy and who gets hot at the right time,” McCullough said.

The Bearcats are in action this weekend at the Subway Shootout at Chipola College in Marianna, Fla.