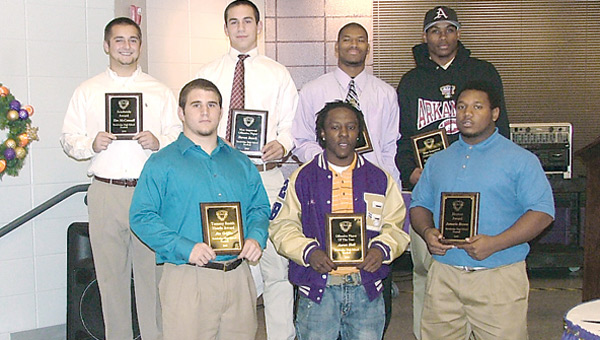 The Tommy Smith Hustle Award, the highest award a BHS football player can receive, is named for a former Bearcat, Navy Lt. j.g. Thomas Livingston Smith Jr., who died Nov. 27, 1961 while staying with his plummeting disabled aircraft to steer it away from a densely populated area near the Naval Air Station in Arsugi, Japan.

The Hustle Award goes annually to a Bearcat player who demonstrates the same qualities of character, leadership, academic achievement and hustle demonstrated by Lt. Smith.

A portrait of Lt. Smith, who was too low for his parachute to open when he ejected from the plane, hangs prominently in the Bainbridge High School lobby.

BHS Head Coach Ed Pilcher thanked the players for their hard work and dedication throughout the season.

“You gave it your all every week,” he said. “We lost our last five Region 1AAAA games by a total of 19 points, With a break here or there, we could have made the playoffs.”

Hall and Price were both honorable mention selections on the coaches’ All-Region 1AAAA team.

Price had 48 tackles, nine of them for losses. He also caused one fumble and had six big plays, two quarterback sacks, three pass breakups, two fumble recoveries and one blocked punt.

Gaines, a second team selection on the All-Region team, was third on the team in tackles with 59, despite missing the final two games of the season due to injury.

Five of his tackles were for losses and he had one quarterback hurry.

The Bearcat Award for outstanding leadership went to senior linebacker Jamario Brown, a first team All-Region selection who led the Bearcats in tackles with 86. Five of his tackles were for losses and he also had nine big plays, forced one fumble, one pass breakup and three fumble recoveries.

Middleton had 43 tackles. Six of his tackles were for losses and he had one caused fumble, 10 quarterback pressures and one quarterback sack.