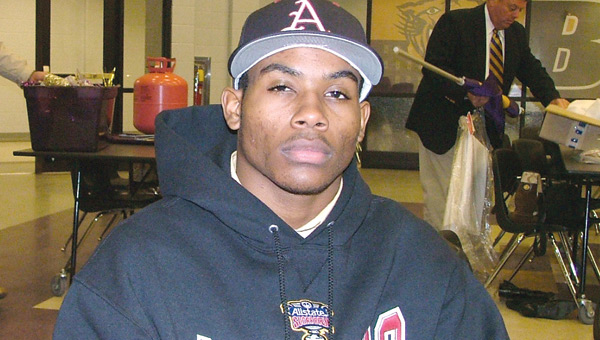 Bainbridge High School senior safety Rohan Gaines verbally committed to play football with the University of Arkansas Razorbacks during a weekend visit to the school.

Gaines, a second team selection on the All-Region 1AAAA team and winner of the Bearcats’ Most Improved Defensive Player award, had impressive statistics this past season, despite missing the last two games due to injury.

Gaines was third on the team in tackles with 59, five of which were for loss. He also had one quarterback hurry.

Gaines also received scholarship offers from Georgia Tech, Georgia Southern, Georgia State and Middle Tennessee. He said he chose Arkansas because he was impressed with Head Coach Bobby Petrino, his staff, and the Razorbacks’ players.

Ray Dominguez, a former BHS Bearcat and a senior starting offensive tackle for the Arkansas this season, guided Gaines on his official visit this past weekend. Gaines also plays basketball for Bainbridge, as did Dominguez.

Former Bearcat Malcolm Sheppard was a standout player for Arkansas and is now a rookie with the NFL’s Houston Texans.

“I also met junior Razorbacks starting linebacker and safety Jerico Nelson on my visit,” Gaines said. “They are recruiting me for the same positions he plays. “They all told me what a great program Arkansas has.”

“All of my coaches taught me that if I work hard every day good things will happen,” Gaines said. “I plan to major in psychology at Arkansas.”