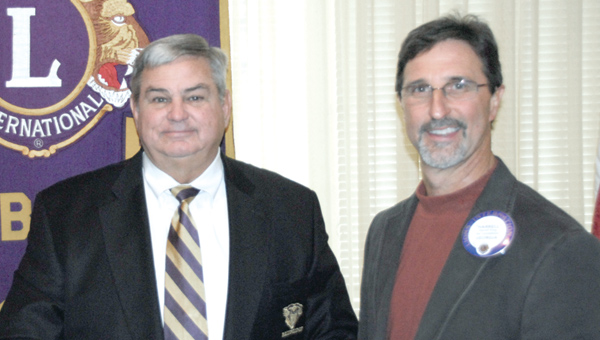 BHS HEAD FOOTBALL COACH Ed Pilcher visited the Bainbridge Lions Club Wednesday to talk about the importance of parents having a positive influence on their student athletes. From left to right are Pilcher and Lions Club President Harrell King.|Brennan Leathers

Ed Pilcher, head coach of the Bainbridge High School football team, has seen a lot in 39 years of coaching, including the past 25 as a head coach.

When people ask him what has changed during his many years of experience, including five state championships, he responds that he believes parents have become much more involved in their children’s athletics.

“Today, all parents would like to see their kid get a college scholarship,” Coach Pilcher told the Bainbridge Lions Club. “The reality is, only about one percent of high school athletes get a scholarship … that’s why it’s important to make sure kids are out there for the right reasons, for enjoyment and because they’re passionate about their sport.”

Pilcher said the pressure parents can put on their student athletes or their coaches can often be negative, but he encourages adults in the community to be positively involved through their support of school sports.

“Encourage [kids] to stay with it even when things aren’t going the way they want them to,” Pilcher said. “I tell my players, it’s not how many times you get knocked down that counts, it’s the number of times you get back up.”

Pilcher said one of his favorite Bible verses that he often shares with players is Galatians 6:9. He paraphrased it as, “Don’t ever get tired of doing the right thing. If you work hard, and keep believing in yourself, good things will eventually happen.”

“Parents and family should pat their kids on the back after games, regardless of the end result,” Pilcher said. “It’s so important that kids know that they have that. Being an athlete today is tough.”

Pilcher said the only proven formula for success in sports is this: that kids work hard on the field or court, be dedicated to their team and do their classroom work with the same amount of effort.