Librarian Jeff Dowdy of Bainbridge College Library was named Tuesday one of 10 librarians recognized for service to his community as a winner of the Carnegie Corporation of New York/New York Times I Love My Librarian Award. 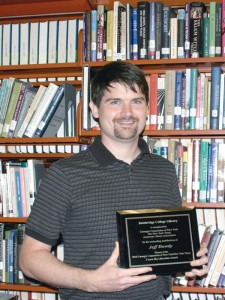 BAINBRIDGE COLLEGE LIBRARIAN Jeff Dowdy holds the national award honoring him that will be displayed in the college library. He is to receive his personal award in New York City on Thursday, Dec. 9.

Only three of the 10 are college or university librarians. Bainbridge College’s Dowdy ranks with colleagues at Harvard University and Texas A&M University.

In his brief tenure at the library, Dowdy has been credited by colleagues for exceptional customer service to the college’s students and faculty. With Bainbridge College Library since 2009, Dowdy holds the Master of Library and Information Studies degree from Florida State University.

The 1993 Bainbridge High School graduate completed his undergraduate degree in English at the University West Georgia. He and his wife, Amy, have four children. Dowdy is the son of John and Brenda Dowdy and grandson of Katy Dowdy, all of Bainbridge.

Each of the 10 award winners receives a $5,000 cash award and will be honored at a ceremony and reception in New York, hosted by The New York Times, on Thursday, Dec. 9.

“Libraries are among those cherished institutions that are most representative of our open society,” said Vartan Gregorian, president of Carnegie Corporation of New York. “We must, therefore, acknowledge that libraries—and hence, librarians—are indispensable to the strength and vitality of our nation and our democracy. Libraries have and always will contain our nation’s heritage, the heritage of humanity, the record of its triumphs and failures, the record of mankind’s intellectual, scientific and artistic achievements. And more, they are the diaries of the human race and the true instruments of civilization that provide tools for learning, understanding and progress. We celebrate them as our link to the past, our partner in navigating the present, and our guide to the future.”

The American Library Association (ALA) administered the award through the Campaign for America’s Libraries, its public awareness campaign that promotes the value of libraries and librarians.

Carnegie Corporation of New York was created by Andrew Carnegie in 1911 to “to do real and permanent good in this world.” For almost 100 years, the corporation has carried out Mr. Carnegie’s vision of philanthropy by building on his two major concerns: international peace and advancing education and knowledge.

The New York Times Company, a leading media company with 2009 revenues of $2.4 billion, includes The New York Times, the International Herald Tribune, The Boston Globe, 15 other daily newspapers, and more than 50 Web sites, including NYTimes.com, Boston.com and About.com. The company’s core purpose is to enhance society by creating, collecting and distributing high-quality news, information and entertainment.

The American Library Association is the oldest and largest library association in the world, with more than 62,000 members. Its mission is to promote the highest quality library and information services and public access to information.

More information about the award recipients is available at www.ilovelibraries.org/ilovemylibrarian.