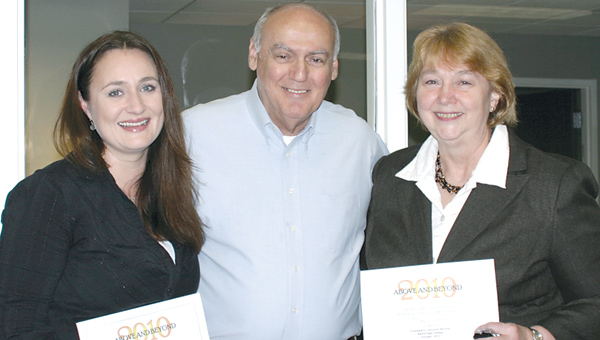 TWO BAINBRIDGE COLLEGE employees received recognition for their customer service during fall semester. From the left are Iron City resident Cherie Owens of the Business Office, BC President Tom Wilkerson, who presented their awards, and Bainbridge resident Mary Guibor of the Student Services Office. President Wilkerson presented their certificates and "Above and Beyond" pins in a brief ceremony Nov. 18 in the Edward D. Mobley Administration Building.|Marcia McRae

The two were honored during a brief ceremony on Nov. 18 in the Edward D. Mobley Administration Building.

Guibor, the honoree for October, is extremely busy assisting students, yet she “always promotes Bainbridge College’s customer service commitment,” according to the nomination for her award. Students have remarked about their positive interactions at the school because of her customer service.

One student said of Guibor, “the lady in the Admission’s Office was extremely helpful, acknowledged our presence although busy answering the phone, smiled and acted willing to do anything we needed.”

Going above and beyond her job description, Owens, who was the honoree for September, has been graciously volunteering her time and her skills in sign language to assist a hearing-impaired student.

“Cherie is always courteous and willing to help,” the nomination said, noting she is helpful to faculty, staff and students, including the hearing-impaired student she attends classes with to translate the lectures. “Her enthusiasm, responsiveness and accommodating attitude are exceptional qualities.”