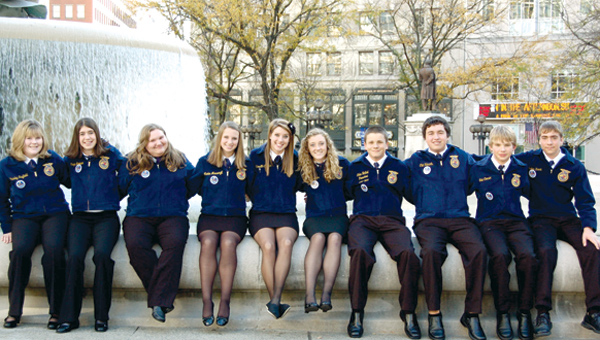 On Oct. 19, 10 members of the Bainbridge High School and Bainbridge Middle School FFA chapters, along with adviser Jesse Kelly, boarded an airplane to Indianapolis, Ind., which was the location for the 2010 National FFA Convention.

It was the 83rd National FFA Convention to be held.

The Georgia FFA Association had eight national winners, and was recognized for its 12th consecutive year of membership growth.

The Georgia FFA Association was recognized as the state association with the third largest membership growth in 2009-2010, with an increase of more than 1,000 members.

The theme for the 2010 convention was “Infinite Potential.” The FFA members enjoyed keynote speakers such as Josh Shipp and Judson Laipply. The members attended several sessions that were held at the Conseco Fieldhouse, as well as the Career shows held at the Indiana Convention Center. The livestock judging was held at the Indiana State Fairgrounds.

The BHS and BMS FFA members were fortunate to attend and assist with this event. Special entertainment included a Lady Antebellum concert held at the Lucas Oil Stadium.

The 83rd National FFA Convention concluded by setting an all-time event attendance record with a total crowd of 54,942 members. There are more than 500,000 FFA members nationwide.

The Georgia Association has more than 30,000 members, making it the third largest association in the nation.

In keeping with our theme, “Infinite Potential,” as FFA members we were challenged. “How is our potential infinite? Specifically define one area in your life where you have settled for average and ask yourself, what are you going to do to break through that?”—Josh Shipp