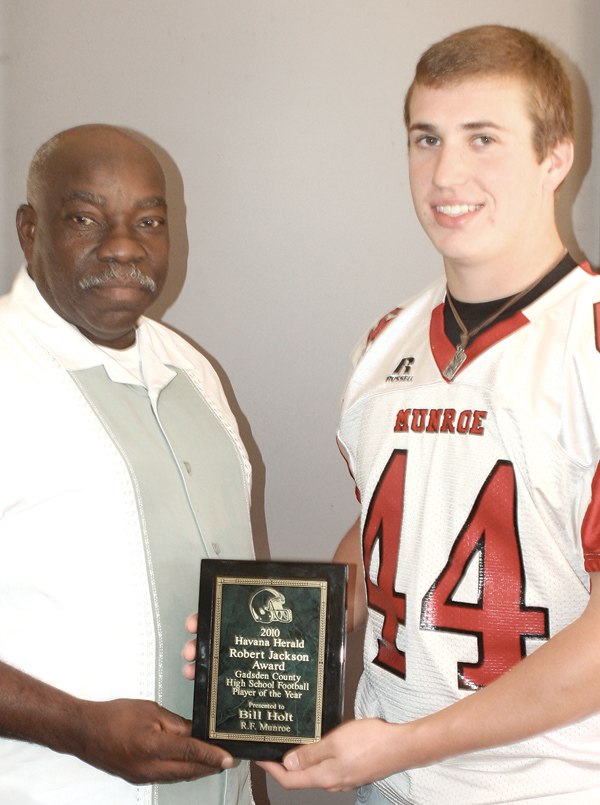 ACCEPTING HONORS from former West Gadsden (Fla.) High School Coach Robert Jackson, Bill Holt a senior fullback and linebacker for the Robert F. Munroe (Fla.) High School Bobcats was named the 2010 Gadsden County Player of the Year by The Havana (Fla.) Herald. Holt is the son of David and Belinda Holt of Attapulgus.

Bill Holt, son of David and Belinda Holt of Attapulgus, has been honored for his efforts on the football field for Robert F. Munroe High School.

Holt was recently named Gadsden County Football Player of the Year by the Havana Herald and received the Robert Jackson Award for outstanding performance.

Bill was selected as an all-county recipient along with five of his teammates from Robert F. Munroe, five players from East Gadsden High School, and four players from West Gadsden High. He then was awarded the Robert Jackson Award, named for the former West Gadsden coach, which is given annually to an outstanding high school football player. Bill, senior fullback and linebacker for the Munroe Bobcats, rushed for over 1200 yards and scored 14 touchdowns during the season. With only 19 players on the Bobcats’ team, Coach Striplin had a very successful season, winning 7 out of 10 games and averaging 35 points per game. Bill is the grandson of Bill and Nita Holt of Bainbridge and of Bernice DuPriest of Brinson.