Bagpiper educates, entertains at BC 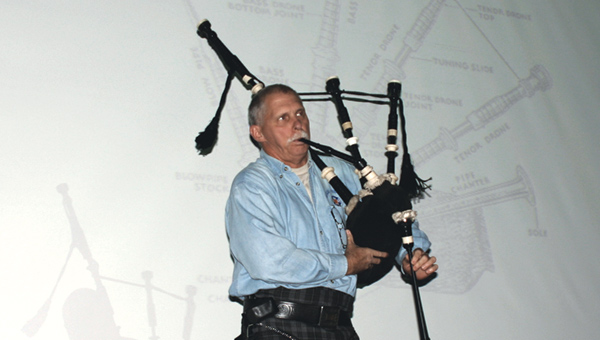 As it prepared to celebrate International Education Week Nov. 15-19, Bainbridge College (BC) gave special emphasis on study abroad opportunities and international films in a series of events, including an evening of entertainment and education for students and others interested in Scotland and the bagpipe.

Scottish bagpiper Joe Ashcraft, a firefighter in Tallahassee, Fla., who performed at BC’s Charles H. Kirbo Regional Center, gave an overview of the musical instrument’s history and its many variations around the world.

After his discussion and performance, the 100 participants had the opportunity to visit with Ashcraft, who has performed in several countries and for five governors and a U.S. president.

Participants also had the opportunity to learn about the upcoming study abroad in Scotland that Dave Nelson of Quincy, Fla., will lead in May.

Classes, which may be taken for college credit, will include U.S. History and literature.